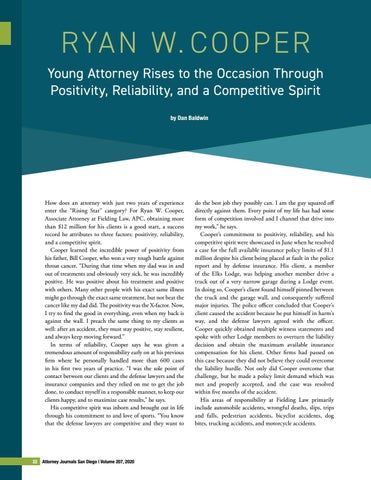 How does an attorney with just two years of experience enter the “Rising Star” category? For Ryan W. Cooper, Associate Attorney at Fielding Law, APC, obtaining more than $12 million for his clients is a good start, a success record he attributes to three factors: positivity, reliability, and a competitive spirit. Cooper learned the incredible power of positivity from his father, Bill Cooper, who won a very tough battle against throat cancer. “During that time when my dad was in and out of treatments and obviously very sick, he was incredibly positive. He was positive about his treatment and positive with others. Many other people with his exact same illness might go through the exact same treatment, but not beat the cancer like my dad did. The positivity was the X-factor. Now, I try to find the good in everything, even when my back is against the wall. I preach the same thing to my clients as well: after an accident, they must stay positive, stay resilient, and always keep moving forward.” In terms of reliability, Cooper says he was given a tremendous amount of responsibility early on at his previous firm where he personally handled more than 600 cases in his first two years of practice. “I was the sole point of contact between our clients and the defense lawyers and the insurance companies and they relied on me to get the job done, to conduct myself in a responsible manner, to keep our clients happy, and to maximize case results,” he says. His competitive spirit was inborn and brought out in life through his commitment to and love of sports. “You know that the defense lawyers are competitive and they want to

do the best job they possibly can. I am the guy squared off directly against them. Every point of my life has had some form of competition involved and I channel that drive into my work,” he says. Cooper’s commitment to positivity, reliability, and his competitive spirit were showcased in June when he resolved a case for the full available insurance policy limits of $1.1 million despite his client being placed at fault in the police report and by defense insurance. His client, a member of the Elks Lodge, was helping another member drive a truck out of a very narrow garage during a Lodge event. In doing so, Cooper’s client found himself pinned between the truck and the garage wall, and consequently suffered major injuries. The police officer concluded that Cooper’s client caused the accident because he put himself in harm’s way, and the defense lawyers agreed with the officer. Cooper quickly obtained multiple witness statements and spoke with other Lodge members to overturn the liability decision and obtain the maximum available insurance compensation for his client. Other firms had passed on this case because they did not believe they could overcome the liability hurdle. Not only did Cooper overcome that challenge, but he made a policy limit demand which was met and properly accepted, and the case was resolved within five months of the accident. His areas of responsibility at Fielding Law primarily include automobile accidents, wrongful deaths, slips, trips and falls, pedestrian accidents, bicyclist accidents, dog bites, trucking accidents, and motorcycle accidents.