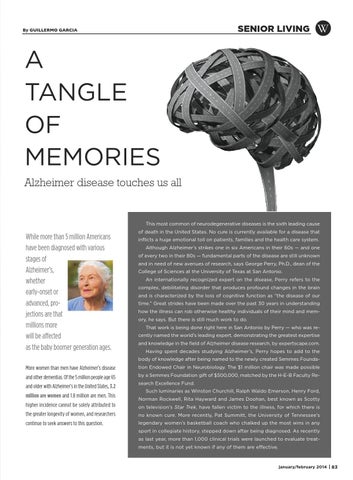 A TANGLE OF MEMORIES Alzheimer disease touches us all

This most common of neurodegenerative diseases is the sixth leading cause of death in the United States. No cure is currently available for a disease that

While more than 5 million Americans have been diagnosed with various stages of Alzheimer’s, whether early-onset or advanced, projections are that millions more will be affected as the baby boomer generation ages.

inflicts a huge emotional toll on patients, families and the health care system. Although Alzheimer’s strikes one in six Americans in their 60s — and one of every two in their 80s — fundamental parts of the disease are still unknown and in need of new avenues of research, says George Perry, Ph.D., dean of the College of Sciences at the University of Texas at San Antonio. An internationally recognized expert on the disease, Perry refers to the complex, debilitating disorder that produces profound changes in the brain and is characterized by the loss of cognitive function as “the disease of our time.” Great strides have been made over the past 30 years in understanding how the illness can rob otherwise healthy individuals of their mind and memory, he says. But there is still much work to do. That work is being done right here in San Antonio by Perry — who was recently named the world’s leading expert, demonstrating the greatest expertise and knowledge in the field of Alzheimer disease research, by expertscape.com. Having spent decades studying Alzheimer’s, Perry hopes to add to the body of knowledge after being named to the newly created Semmes Founda-

More women than men have Alzheimer’s disease and other dementias. Of the 5 million people age 65 and older with Alzheimer’s in the United States, 3.2 million are women and 1.8 million are men. This higher incidence cannot be solely attributed to the greater longevity of women, and researchers continue to seek answers to this question.

tion Endowed Chair in Neurobiology. The $1 million chair was made possible by a Semmes Foundation gift of $500,000, matched by the H-E-B Faculty Research Excellence Fund. Such luminaries as Winston Churchill, Ralph Waldo Emerson, Henry Ford, Norman Rockwell, Rita Hayward and James Doohan, best known as Scotty on television’s Star Trek, have fallen victim to the illness, for which there is no known cure. More recently, Pat Summitt, the University of Tennessee’s legendary women’s basketball coach who chalked up the most wins in any sport in collegiate history, stepped down after being diagnosed. As recently as last year, more than 1,000 clinical trials were launched to evaluate treatments, but it is not yet known if any of them are effective. 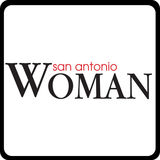