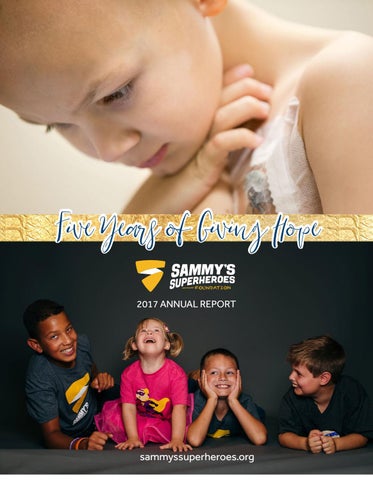 Since Sammy’s Superheroes Foundation was formed in 2013, we have seen considerable growth in our team, our exposure, and most importantly our grantmaking.

OUR MISSION We are working hard to get our name and mission in front of new people through events and partnerships (pages 5-6) and through our incredible volunteers. This past year we added a junior board at the University of NebraskaLincoln. These college students are raising awareness and funding through events at UNL and the Downtown/ Haymarket District. We are so grateful for their support! We’ve also taken Sammy’ Superheroes Foundation onto the national scene through events and programs like CureFest and the Coalition Against Childhood Cancer. OUR GRANTS This past year we gave out over $130,000 (see page 3), and we are committed to continuing to fund research that will help find cures and modern treatments for all 13 types of childhood cancer. Sammy’s Superheroes Foundation could not have accomplished so much so soon without the support of so many supporters and partners. We truly appreciate the generosity of so many, and pledge to be good stewards of the funds entrusted to us. Thank you for your continued support and joining the fight against childhood cancer!

Jeremy Stanislav was hired as our first-ever Executive Director in May 2016. With more than 16 years of experience in both the private and agency world of marketing, he is focused on developing a platform and strategy for Sammy’s Superheroes to grow to new communities. His passion for the cause will drive him to lead Sammy’s to become a major player in the pediatric cancer area. In August 2017, we were also blessed to be able to hire our two-time summer intern, Alyssa Theilen, as our Development Coordinator. Alyssa has hit the ground running in managing our events and volunteers and is a huge help to the team.

*The addition of our first-ever paid staff is reflected in the 2017 administrative expenses below. We are excited for this investment in the future of our organization and ability to achieve our mission.

For year ending December 31, 2017. Not to be considered as part of audited financial statements.

A phase III clinical trial to study the addition of I- MIBG to standard therapy for children with newlydiagnosed high-risk neuroblastoma to determine definitively whether adding the drug will improve cure rates for children receiving frontline therapy. I-MIBG is a form of targeted radiation that has a strong track record in treating children with relapsed neuroblastoma.

For many rare cancers, researchers don’t have much to work with because information isn’t available or is only in a form that can’t be collected and examined together/published in journals. Comer Children’s Hospital’s Susan Cohn, MD intends to change that with the Pediatric Cancer Data Commons (PCDC).

This project, funded in partnership with Lolo’s Angels, is the largest, most-comprehensive and methodical disease biology study ever conducted in pediatric cancer, leveraging large-scale, genomic sequencing of 1000 banked patient samples. This process will uncover new therapeutic targets, which will be mapped to all existing and emerging targeted agents, resulting in a muchneeded, expanded treatment arsenal.

By leveraging the platform built by Robert Grossman, PhD, at the University of Chicago for the Genomic Data Commons—the project will collect, standardize, store, and analyze genomic and clinical information from thousands of patients. PCDC will link pediatric cancer databases with genomic data and provide the analytic tools to help researchers find patterns associating patient genetics and tumor genomics with treatment response and outcome. This will lead to better diagnostics, better treatment regiments, and ultimately, better lives.

Unite in the fight! That’s the mantra for

Sammy’s Superheroes Sidekicks, an initiative launched in 2017 designed to revolutionize fundraising for pediatric cancer research. The Sidekicks program allows supporter groups to set up an affiliate under the Sammy’s Superheroes Foundation, choosing which type of targeted cancer research they want to fund. All donations given to this cause are then eligible for charitable tax credits. Donations marked for similar purposes are pooled for maximum impact. For example, this can make a $1000 grant become $50,000 or more when groups pool funds raised! More collaboration, more impact!

Sidekicks maintain everything they’ve worked hard to build including their name/logo, donors, and passion, while having access to top-level benefits. All Sidekicks will have access to: fundraising administrative support, the Sammy’s Superheroes Foundation Medical Advisory group, and online marketing tools including a crowdfunding webpage.

The Sidekicks program will help cancer families and supporters collaboratively fund the type of research needed to find the cure for childhood cancer once-and-for-all. To learn more about the program and how you can set up or support a Sidekick, visit sammyssuperheroes.org/sidekicks.

Meet two of our Sidekicks kids! To learn more about Aiden and Darin and how you can support their Sidekicks projects, visit SammysSuperheroes.org/Sidekicks.

In the beginning of January 2016, eight-year-old Aiden’s voice began to change. His parents thought it must be a cold, until he started to snore oddly. They looked into his throat with a flashlight and saw a mass. Doctor’s thought the mass was an enlarged tonsil and scheduled a tonsillectomy. During the surgery it was clear the tonsils were fine and the surgeon did his best to get a majority of the mass out. On January 29th, Aiden was diagnosed with Embryonal Rhabdomyosarcoma of the Parameningeal Space. A whirlwind of tests, scans and surgeries also confirmed a metastatic disease in both lungs. Aiden was given a chemo protocol of 54 weeks of chemo at Children’s Hospital in Omaha and six weeks of radiation in Chicago. Aiden did amazing with his treatments and has had no evidence of his disease since October 2016 and has been off treatment since February 2017! More than $2000 has been raised for Aiden’s Army sidekicks project so far!

Darin Neben was diagnosed January of 2014 with Stage Four High Risk Neuroblastoma Cancer. He received three rounds of chemo and a stem cell harvest. In June 2014 he went through a very long surgery to remove the tumor in his stomach. In July 2014 he had an additional round of chemo that wiped everything in his system out so he could have a stem cell transplant. Darin remained stable until September 2016. Then everything they said wouldn’t happen (loss of hair, counts dropping, etc.) happened. Darin reacted differently due to his bone marrow pockets being too small. Today, Darin is currently stable.

“We along with some great friends who have also been affected by cancer started to raise prizes to donate to the hospital for kids to put smiles on their faces. The two kids have raised these little prizes for over two years! We love doing this, but to me it’s just not enough. These kids are our future, they deserve treatments that are meant for them and not adults. All donations (from our Sidekicks project) will go to a research hospital in hopes to finding new treatments for our kids fighting.” 6

A small-town community football game and a few thousand t-shirt sales are what started Sammy’s Superheroes Foundation, so community events will always hold a special place in our organization’s mission. At these events, it’s not about the money raised, it’s about the connections made with each individual, it’s about the pride raised in the community, and sometimes it’s about the healing for a family who’s mourning. We are so grateful to have had so many organizations partner with us in 2017.

From restaurant tip nights to community-wide giving days, each of these events helps us spread our mission further so that we can help more children and families affected by childhood cancer.

An evening of fun activities for the whole family and special honors for families currently fighting childhood cancer and/or honoring and remembering their angels with a special ceremony, children’s choir performance, balloon release and honor walk

A 5k trail run on the challenging Cross Country course just northeast of Columbus, NE; the only thing that may get you through the havoc of the hills is the beer, brats and live band at the finish line Throughout the year, Sammy’s Superheroes Foundation hosts three signature events throughout our home state of Nebraska. To learn more about these events and how to get involved, visit sammyssuperheroes.org/events

A family-fun event hosted at Village Pointe Toyota that includes games, food, fun, a one-mile-honor walk for anyone ever affected by childhood cancer, and a children’s choir performance and balloon release to honor all of the childhood cancer angels

In spring 2017, Sammy’s Superheroes Foundation was chosen to participate in an online voting contest: the Art From the Heart Project, to win a one-of-a-kind painting from Jeff Hanson. Hanson, an artist who is a childhood cancer survivor himself, first began painting watercolor notecards while undergoing chemotherapy at age 12. What was initially a pastime and distraction from his treatments, Jeff’s painting soon evolved into a fulltime business and eventually a foundation. Hanson has received national attention for raising $1 million for charity with his art by his 20th birthday. As of today he has raised more than $3 million. Jeff’s paintings now hang in the homes of art collectors across the globe, including Sir Elton John,

Warren Buffett, John Cena, Dale Earnhardt, Jr. and many others touched by Jeff’s generous soul and unique style. Thanks to our amazing supporters, we won the contest and the painting from Hanson. In the meantime, a connection was made with MLB Cubs Baseball player Brian Duensing. His foundation was looking for a beneficiary for their annual gala. The Duensing Foundation graciously chose to make Sammy’s Superheroes Foundation their 2017 beneficiary, allowing us a unique venue to auction of Hanson’s painting. The Duensing Foundation Annual Gala took place in fall 2017 and generated $103,000 in proceeds for Sammy’s Superheroes Foundation! We are so grateful for both organizations for their passion and desire to help others.

Of that amount, Sammy’s Superheroes was one of three organizations chosen to receive $32,000 from SeneGence International and their foundation, The MakeSense Foundation.

At the same time, some very passionate women from Nebraska challenged their fellow SeneSisters to donate directly to our cause through the ‘SeneSisters Go Gold’ campaign. Donors from all over nation raised funds online with their customers and teams to raise over $35,000. Thank you to SeneGence International and everyone in this company for ‘going gold’ during Childhood Cancer Awareness Month!

Going Above &amp; Beyond Shootout for Cancer Golf Tournament Northwestern Mutual has been an amazing advocate and supporter for childhood cancer as a whole, and they have been an equally generous corporate partner for Sammy’s Superheroes Foundation. This year, their 2nd annual Shootout for Cancer took place at Champions Run Golf Course. The golf outing proceeds are given to multiple childhood cancer organizations. A donation of $15,000 was made to Sammy’s Superheroes Foundation, as well as to Alex’s Lemonade Stand, Camp Coholo and Pediatric Cancer Action Network. Northwestern Mutual supports Sammy’s Superheroes Foundation in various ways throughout the year by organizing small events, promoting our events and advocate for our cause. This company is making a huge impact in the childhood cancer world and we are so honored to be apart of it!

is a world where childhood cancer no longer exists. We know the fight will be long, but we will not stop

until we get there. Because we know that together we can give our kids a better life. Thank you for being a part of our fight for the past five years.