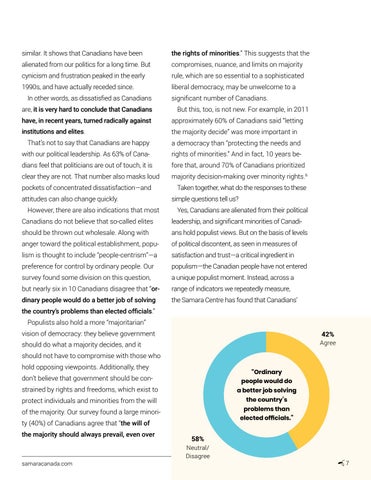 similar. It shows that Canadians have been

the rights of minorities.” This suggests that the

alienated from our politics for a long time. But

compromises, nuance, and limits on majority

cynicism and frustration peaked in the early

rule, which are so essential to a sophisticated

1990s, and have actually receded since.

liberal democracy, may be unwelcome to a

In other words, as dissatisfied as Canadians are, it is very hard to conclude that Canadians

significant number of Canadians. But this, too, is not new. For example, in 2011

have, in recent years, turned radically against

the majority decide” was more important in

That’s not to say that Canadians are happy

a democracy than “protecting the needs and

with our political leadership. As 63% of Cana-

rights of minorities.” And in fact, 10 years be-

dians feel that politicians are out of touch, it is

fore that, around 70% of Canadians prioritized

clear they are not. That number also masks loud

pockets of concentrated dissatisfaction—and attitudes can also change quickly. However, there are also indications that most

Taken together, what do the responses to these simple questions tell us? Yes, Canadians are alienated from their political

Canadians do not believe that so-called elites

leadership, and significant minorities of Canadi-

should be thrown out wholesale. Along with

ans hold populist views. But on the basis of levels

anger toward the political establishment, popu-

of political discontent, as seen in measures of

lism is thought to include “people-centrism”—a

satisfaction and trust—a critical ingredient in

preference for control by ordinary people. Our

populism—the Canadian people have not entered

survey found some division on this question,

a unique populist moment. Instead, across a

but nearly six in 10 Canadians disagree that “or-

range of indicators we repeatedly measure,

dinary people would do a better job of solving

the Samara Centre has found that Canadians’

should do what a majority decides, and it

should not have to compromise with those who hold opposing viewpoints. Additionally, they

don’t believe that government should be con-

strained by rights and freedoms, which exist to

a better job solving the country’s

protect individuals and minorities from the will

of the majority. Our survey found a large minori-

ty (40%) of Canadians agree that “the will of the majority should always prevail, even over 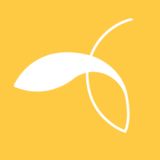 The Samara Centre for Democracy

Don't Blame "The People": The Rise of Elite-led Populism in Canada

Recent media and political commentary suggests that populism is growing in Canada, even that it is transforming our politics. This report us...

Don't Blame "The People": The Rise of Elite-led Populism in Canada

Recent media and political commentary suggests that populism is growing in Canada, even that it is transforming our politics. This report us...