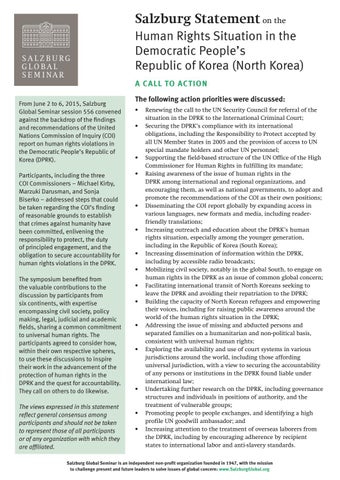 Salzburg Statement on the Human Rights Situation in the Democratic People’s Republic of Korea (North Korea) A CALL TO ACTION From June 2 to 6, 2015, Salzburg Global Seminar session 556 convened against the backdrop of the findings and recommendations of the United Nations Commission of Inquiry (COI) report on human rights violations in the Democratic People’s Republic of Korea (DPRK). Participants, including the three COI Commissioners – Michael Kirby, Marzuki Darusman, and Sonja Biserko – addressed steps that could be taken regarding the COI’s finding of reasonable grounds to establish that crimes against humanity have been committed, enlivening the responsibility to protect, the duty of principled engagement, and the obligation to secure accountability for human rights violations in the DPRK. The symposium benefited from the valuable contributions to the discussion by participants from six continents, with expertise encompassing civil society, policy making, legal, judicial and academic fields, sharing a common commitment to universal human rights. The participants agreed to consider how, within their own respective spheres, to use these discussions to inspire their work in the advancement of the protection of human rights in the DPRK and the quest for accountability. They call on others to do likewise. The views expressed in this statement reflect general consensus among participants and should not be taken to represent those of all participants or of any organization with which they are affiliated.

The following action priorities were discussed: • Renewing the call to the UN Security Council for referral of the situation in the DPRK to the International Criminal Court; • Securing the DPRK’s compliance with its international obligations, including the Responsibility to Protect accepted by all UN Member States in 2005 and the provision of access to UN special mandate holders and other UN personnel; • Supporting the field-based structure of the UN Office of the High Commissioner for Human Rights in fulfilling its mandate; • Raising awareness of the issue of human rights in the DPRK among international and regional organizations, and encouraging them, as well as national governments, to adopt and promote the recommendations of the COI as their own positions; • Disseminating the COI report globally by expanding access in various languages, new formats and media, including readerfriendly translations; • Increasing outreach and education about the DPRK’s human rights situation, especially among the younger generation, including in the Republic of Korea (South Korea); • Increasing dissemination of information within the DPRK, including by accessible radio broadcasts; • Mobilizing civil society, notably in the global South, to engage on human rights in the DPRK as an issue of common global concern; • Facilitating international transit of North Koreans seeking to leave the DPRK and avoiding their repatriation to the DPRK; • Building the capacity of North Korean refugees and empowering their voices, including for raising public awareness around the world of the human rights situation in the DPRK; • Addressing the issue of missing and abducted persons and separated families on a humanitarian and non-political basis, consistent with universal human rights; • Exploring the availability and use of court systems in various jurisdictions around the world, including those affording universal jurisdiction, with a view to securing the accountability of any persons or institutions in the DPRK found liable under international law; • Undertaking further research on the DPRK, including governance structures and individuals in positions of authority, and the treatment of vulnerable groups; • Promoting people to people exchanges, and identifying a high profile UN goodwill ambassador; and • Increasing attention to the treatment of overseas laborers from the DPRK, including by encouraging adherence by recipient states to international labor and anti-slavery standards.

Salzburg Global Seminar is an independent non-profit organization founded in 1947, with the mission to challenge present and future leaders to solve issues of global concern: www.SalzburgGlobal.org 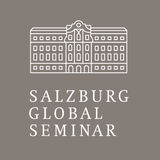 From June 2 to 6, 2015, Salzburg Global Seminar session 556 convened against the backdrop of the findings and recommendations of the United...

From June 2 to 6, 2015, Salzburg Global Seminar session 556 convened against the backdrop of the findings and recommendations of the United...