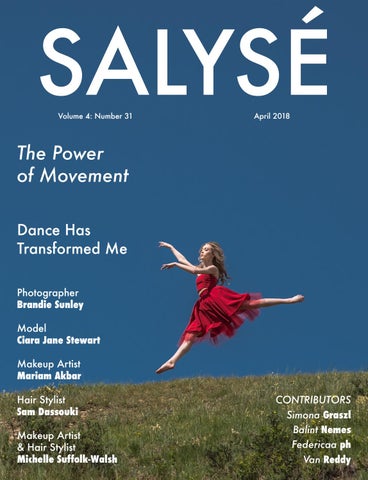 SALYSÃ&#x2030; We have moved our submissions to

Letter from the Editor Dear Salysians, I love dance. Although sometimes I seem to have two left feet, there is nothing more empowering than the freedom of movement. The April issues are a celebration of movement in various forms and styles. It was such a pleasure putting this issue together. Enjoy the April issue! As always, I hope you enjoy your escape! Hugs and Love, Sonya Alyse Lawyer SALYSĂ&#x2030;, Founder and Editor in Chief

We wanted to show real athletes and the bodies they use to excel in their respective sports. From dance to mountaineering to boxing, and everything in-between, strong is beautiful.

Swimming & Triathlon Katie Keller | Swimming & Triathlong | @banbossyhair Katie grew up with a swimming family. She took her first lessons before she could even walk with her Dad, who competed in swimming and waterpolo his whole life. Katie started competitively swimming at the age of 7 breaking records and making it to Far Westerns multiple times at a young age. In high school she was a star athlete adding track and field, golf, and football to her resume. She continues playing golf and swimming now into her 30s. Katie plans to compete in her first triathlon later this year.

Becki Adams | Rock-climbing |@BeckiSmada Becki has always been an adventure seeker and sports enthusiast. Born and raised in Nebraska, she didn't discover climbing until her husband signed them up for a rock climbing class as an anniversary gift. She was hooked! It took some time to get used to the heights and rappelling, but she was able to work through it. She's been climbing for about 8 years now and loves overcoming new challenges. She says, ”There are always things you can work on to improve, so you never get bored.”

Frankie Tan | Ballet | @frankiesayspause Frankie was dancing before she could walk, and hasn’t stopped since. She has been doing ballet for the past twenty years and began performing professionally at the age of fifteen. Frankie branched out to other styles of dance when a serious injury took her out of pointe shoes for almost a year, but she went on to graduate from Alonzo King Lines Ballet’s training program as well as their Apprentice Teaching Program. She has since been featured dancing in music videos for artists ranging from Ray LaMontagne to RexxLifeRaj, and works primarily as a freelance dance artist and instructor in ballet, contemporary, hip hop, vogue, and fusion.

Heather Werner | Mountaineering | @foundations_hairandmakeup Heather began mountain climbing with her family as soon as she was old enough to carry her own pack. She spent summers backpacking on the Appalachian Trail and winters learning to climb New Hampshireâ&#x20AC;&#x2122;s ice-covered White Mountains. She has recently climbed the highest peaks in Africa, Europe, Australia and Antarctica, and has her sights set on the highest mountain on every continent.

Jessica Dougherty Goodburn Contemporary Dance Jessica Dougherty Goodburn | Contemporary Dance Jessica began her dance training at a small studio in Missoula, Montana, and went on to receive a BA in Dance at the University of Oregon. She took a break from dancing when she graduated and sought other avenues of physical and artistic expression, leading her to partner acrobatics. Following a move to California in 2011, Jessica helped to found a circus arts collective, and performed at various Bay Area festivals with the group, including San Jose’s First Friday and SubZero and San Francisco’s Yerba Buena Night. When not dancing, Jessica teaches Pilates at a studio in Los Altos.

Jenni Porter | Boxing | GetJenergy@gmail.com Jenni has been boxing for the past six years where she found her love for coaching others. Not only is she sparring with and training different fight camps and athletes for battle, but she is constantly on the move from the Bay Area to LA teaching her branded BADASS & BURN bootcamp workouts.

Annali Rose Ballet & Pilates Annali Rose Annali Rose was a professional ballet dancer for 18 years. During this time she discovered Pilates and found it was a wonderful way to strengthen and cross train for muscular balancing and injury prevention. She is now a fully certified STOTT PILATES instructor and teaches full time.

Quinta Ekong | Bodybuilding | @queenekong Quinta began bodybuilding in November 2015. She was looking for a challenge and fell in love with the sport of bodybuilding. Every time she has competed, she has finished in the Top 5. She is currently sponsored by Formula Sports Nutrition. She has her sights sent on doing Nationals so that she can receive her Pro Card and be a Professional Bodybuilder.

Ruthie Aideyan High Jumper Ruthie Aideyan | High Jumper | @ModelFITbyRuthie Ruthieâ&#x20AC;&#x2122;s passion for fitness began in the 5th grade when she started high jumping. Throughout the years she also competed in triple jumped and was part of the 4x100 relay team. When she got pregnant in college, she traded varsity track for personal fitness. Now in the best shape of her life, she inspires other women to chase their goals with #noexcuses (through fitness and beyond).

Cycling, Triathlon, & Running Aleks Todorova | Cycling, Triathlon, Running | @aleksruns Aleks discovered her love of cycling and triathlon a few short years ago, while rehabbing a sprained ankle. Talk about finding your true passion by accident! So with more than 100 running races and several marathons behind her, she started adding triathlon medals to her collection. She is a Boston Marathon and Ironman finisher, and most recently, she qualified for the Ironman 70.3 World Championship in 2018. Aleks is the founder and head coach at California Running Lab, a premier endurance coaching service for runners and triathletes.

Rhythm of the Unseen

There once was a dark and beautiful creature trapped inside a strange world.

In her world, she began to explore.

Finding that movement brought her courage to leave the safety of the dark woods.

Her movements began to free her.

Her antlers began to change.

She could feel she was going to be different.

The power erupted from within her.

This was a new and strange place.

She was a new creature.

There were things to discover.

This new place was exhilarating!

SALYSÉ SALYSÉ Magazine is a photography magazine, featuring beauty, fashion, and conceptual art editorials. We do not seek to define beauty with one narrow idea, but with myriad viewpoints Vintage is right next to emerging designers, who are right next to established designers. We are looking for creatives who push the envelope, take chances, and disregard the status quo. SALYSÉ Magazine is about sophistication, authenticity, with a touch of eccentricity. ---------FOLLOW https://instagram.com/salysemagazine/ LIKE https://www.facebook.com/salysemagazine SUBSCRIBE http://issuu.com/salysemagazine PURCHASE http://www.magcloud.com ---------Not just a magazine— a movement!

The Decades Issue published May 1st Submissions due by April 15th

Submissions due by May 15th

For more information on how to submit editorials, please visit www.salyse.com

The Power of Movement 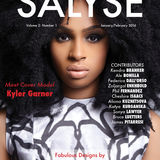