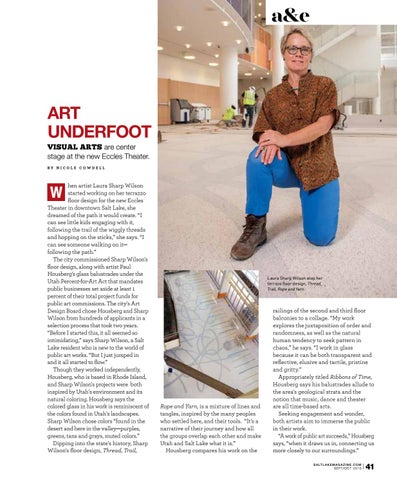 hen artist Laura Sharp Wilson started working on her terrazzo floor design for the new Eccles Theater in downtown Salt Lake, she dreamed of the path it would create. “I can see little kids engaging with it, following the trail of the wiggly threads and hopping on the sticks,” she says. “I can see someone walking on it— following the path.” The city commissioned Sharp Wilson&#39;s floor design, along with artist Paul Housberg&#39;s glass balustrades under the Utah Percent-for-Art Act that mandates public businesses set aside at least 1 percent of their total project funds for public art commissions. The city&#39;s Art Design Board chose Housberg and Sharp Wilson from hundreds of applicants in a selection process that took two years. “Before I started this, it all seemed so intimidating,” says Sharp Wilson, a Salt Lake resident who is new to the world of public art works. “But I just jumped in and it all started to flow.” Though they worked independently, Housberg, who is based in Rhode Island, and Sharp Wilson&#39;s projects were both inspired by Utah&#39;s environment and its natural coloring. Housberg says the colored glass in his work is reminiscent of the colors found in Utah&#39;s landscapes. Sharp Wilson chose colors “found in the desert and here in the valley—purples, greens, tans and grays, muted colors.” Dipping into the state&#39;s history, Sharp Wilson&#39;s floor design, Thread, Trail,

Rope and Yarn, is a mixture of lines and tangles, inspired by the many peoples who settled here, and their tools. “It&#39;s a narrative of their journey and how all the groups overlap each other and make Utah and Salt Lake what it is.” Housberg compares his work on the

railings of the second and third floor balconies to a collage. “My work explores the juxtaposition of order and randomness, as well as the natural human tendency to seek pattern in chaos,” he says. “I work in glass because it can be both transparent and reflective, elusive and tactile, pristine and gritty.” Appropriately titled Ribbons of Time, Housberg says his balustrades allude to the area&#39;s geological strata and the notion that music, dance and theater are all time-based arts. Seeking engagement and wonder, both artists aim to immerse the public in their work. “A work of public art succeeds,” Housberg says, “when it draws us in, connecting us more closely to our surroundings.” S A LT L A K E M A G A Z I N E . C O M SEPT/OCT 2016 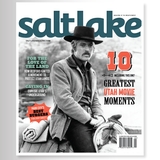