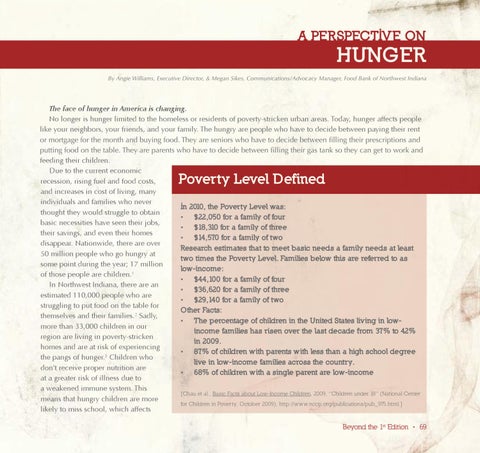 The face of hunger in America is changing. No longer is hunger limited to the homeless or residents of poverty-stricken urban areas. Today, hunger affects people like your neighbors, your friends, and your family. The hungry are people who have to decide between paying their rent VYTVY[NHNLMVY[OLTVU[OHUKI\`PUNMVVK;OL`HYLZLUPVYZ^OVOH]L[VKLJPKLIL[^LLUĂ&#x201E;SSPUN[OLPYWYLZJYPW[PVUZHUK W\[[PUNMVVKVU[OL[HISL;OL`HYLWHYLU[Z^OVOH]L[VKLJPKLIL[^LLUĂ&#x201E;SSPUN[OLPYNHZ[HURZV[OL`JHUNL[[V^VYRHUK feeding their children. Due to the current economic recession, rising fuel and food costs, and increases in cost of living, many individuals and families who never In 2010, the Poverty Level was: thought they would struggle to obtain } $22,050 for a family of four basic necessities have seen their jobs, } $18,310 for a family of three their savings, and even their homes } $14,570 for a family of two disappear. Nationwide, there are over Research estimates that to meet basic needs a family needs at least 50 million people who go hungry at two times the Poverty Level. Families below this are referred to as some point during the year; 17 million low-income: of those people are children.1 } $44,100 for a family of four In Northwest Indiana, there are an } $36,620 for a family of three estimated 110,000 people who are } $29,140 for a family of two struggling to put food on the table for Other Facts: themselves and their families.2 Sadly, } The percentage of children in the United States living in lowmore than 33,000 children in our income families has risen over the last decade from 37% to 42% region are living in poverty-stricken in 2009. homes and are at risk of experiencing } 87% of children with parents with less than a high school degree the pangs of hunger.3 Children who live in low-income families across the country. donâ&#x20AC;&#x2122;t receive proper nutrition are } 68% of children with a single parent are low-income at a greater risk of illness due to a weakened immune system. This [Chau et al., Basic Facts about Low-Income Children, 2009, â&#x20AC;&#x153;Children under 18â&#x20AC;? (National Center means that hungry children are more for Children in Poverty, October 2009), http://www.nccp.org/publications/pub_975.html.] likely to miss school, which affects