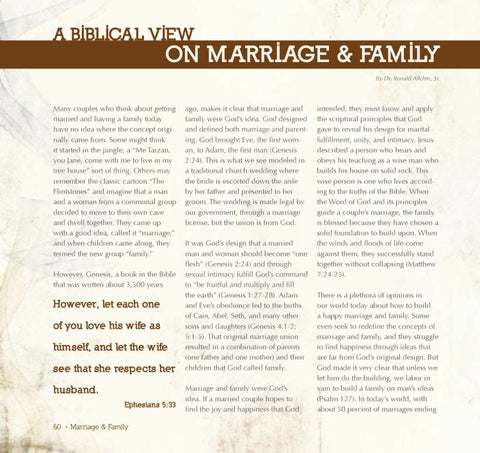 However, let each one of you love his wife as himself, and let the wife see that she respects her husband. Ephesians 5:33 % } &lt;PaaXPVT 5P\X[h

ago, makes it clear that marriage and family were Godâ&amp;#x20AC;&amp;#x2122;s idea. God designed HUK KLĂ&amp;#x201E;ULK IV[O THYYPHNL HUK WHYLU[PUN .VK IYV\NO[ ,]L [OL Ă&amp;#x201E;YZ[ ^VTHU [V (KHT [OL Ă&amp;#x201E;YZ[ THU .LULZPZ 2:24). This is what we see modeled in a traditional church wedding where the bride is escorted down the aisle by her father and presented to her groom. The wedding is made legal by our government, through a marriage license, but the union is from God.

This book is meant to stir your hearts for our community and help you see Northwest Indiana through the lens of Jesus – a place he dearly loves and for whom he has given his life. This guidebook is your invitation to join together to be the hands and feet of Jesus to a hurting community. It’s a call to discover our region and understand our citizens.