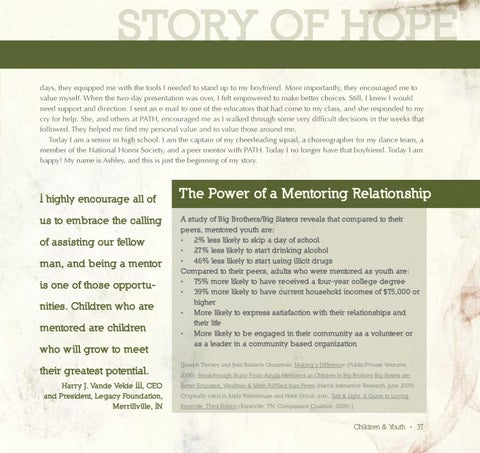 STORY OF HOPE days, they equipped me with the tools I needed to stand up to my boyfriend. More importantly, they encouraged me to value myself. When the two-day presentation was over, I felt empowered to make better choices. Still, I knew I would need support and direction. I sent an e-mail to one of the educators that had come to my class, and she responded to my JY`MVYOLSW:OLHUKV[OLYZH[7(;/LUJV\YHNLKTLHZ0^HSRLK[OYV\NOZVTL]LY`KPMĂ&#x201E;J\S[KLJPZPVUZPU[OL^LLRZ[OH[ MVSSV^LK;OL`OLSWLKTLĂ&#x201E;UKT`WLYZVUHS]HS\LHUK[V]HS\L[OVZLHYV\UKTL Today I am a senior in high school. I am the captain of my cheerleading squad, a choreographer for my dance team, a member of the National Honor Society, and a peer mentor with PATH. Today I no longer have that boyfriend. Today I am happy! My name is Ashley, and this is just the beginning of my story.

I highly encourage all of us to embrace the calling of assisting our fellow man, and being a mentor is one of those opportunities. Children who are mentored are children who will grow to meet their greatest potential. Harry J. Vande Velde III, CEO and President, Legacy Foundation, Merrillville, IN

The Power of a Mentoring Relationship A study of Big Brothers/Big Sisters reveals that compared to their peers, mentored youth are: } 2% less likely to skip a day of school } 27% less likely to start drinking alcohol } 46% less likely to start using illicit drugs Compared to their peers, adults who were mentored as youth are: } 75% more likely to have received a four-year college degree } 39% more likely to have current household incomes of $75,000 or higher } More likely to express satisfaction with their relationships and their life } More likely to be engaged in their community as a volunteer or as a leader in a community based organization [Joseph Tierney and Jean Baldwin Grossman, Making a Difference (Public/Private Ventures, 2000); Breakthrough Study Finds Adults Mentored as Children in Big Brothers Big Sisters are Better Educated, Wealthier & More Fulfilled than Peers (Harris Interactive Research, June 2009) Originally cited in Andy Rittenhouse and Heidi Unruh, eds., Salt & Light: A Guide to Loving Knoxvile, Third Edition (Knoxville, TN: Compassion Coalition, 2009).]