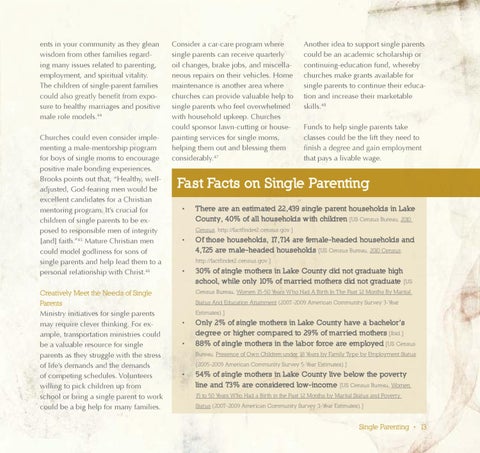 ents in your community as they glean wisdom from other families regarding many issues related to parenting, employment, and spiritual vitality. The children of single-parent families JV\SKHSZVNYLH[S`ILULĂ&#x201E;[MYVTL_WVsure to healthy marriages and positive male role models.44 Churches could even consider implementing a male-mentorship program for boys of single moms to encourage positive male bonding experiences. Brooks points out that, â&#x20AC;&#x153;Healthy, welladjusted, God-fearing men would be excellent candidates for a Christian mentoring program. Itâ&#x20AC;&#x2122;s crucial for children of single parents to be exposed to responsible men of integrity [and] faith.â&#x20AC;?45 Mature Christian men could model godliness for sons of single parents and help lead them to a personal relationship with Christ.46 2aTPcXeT[h<TTccWT=TTSb^UBX]V[T ?PaT]cb Ministry initiatives for single parents may require clever thinking. For example, transportation ministries could be a valuable resource for single parents as they struggle with the stress of lifeâ&#x20AC;&#x2122;s demands and the demands of competing schedules. Volunteers willing to pick children up from school or bring a single parent to work could be a big help for many families.

Consider a car-care program where single parents can receive quarterly oil changes, brake jobs, and miscellaneous repairs on their vehicles. Home maintenance is another area where churches can provide valuable help to single parents who feel overwhelmed with household upkeep. Churches could sponsor lawn-cutting or housepainting services for single moms, helping them out and blessing them considerably.47

Another idea to support single parents could be an academic scholarship or continuing-education fund, whereby churches make grants available for single parents to continue their education and increase their marketable skills.48 Funds to help single parents take classes could be the lift they need to Ă&#x201E;UPZOHKLNYLLHUKNHPULTWSV`TLU[ that pays a livable wage.

There are an estimated 22,439 single parent households in Lake County, 40% of all households with children [US Census Bureau, 2010 Census. http://factfinder2.census.gov.]

30% of single mothers in Lake County did not graduate high school, while only 10% of married mothers did not graduate [US Census Bureau, Women 15-50 Years Who Had A Birth In The Past 12 Months By Marital Status And Education Attainment (2007-2009 American Community Survey 3-Year Estimates).]

Only 2% of single mothers in Lake County have a bachelorâ&#x20AC;&#x2122;s degree or higher compared to 29% of married mothers [Ibid.] 88% of single mothers in the labor force are employed [US Census Bureau, Presence of Own Children under 18 Years by Family Type by Employment Status (2005-2009 American Community Survey 5-Year Estimates).]

54% of single mothers in Lake County live below the poverty line and 73% are considered low-income [US Census Bureau, Women 15 to 50 Years Who Had a Birth in the Past 12 Months by Marital Status and Poverty Status (2007-2009 American Community Survey 3-Year Estimates).]