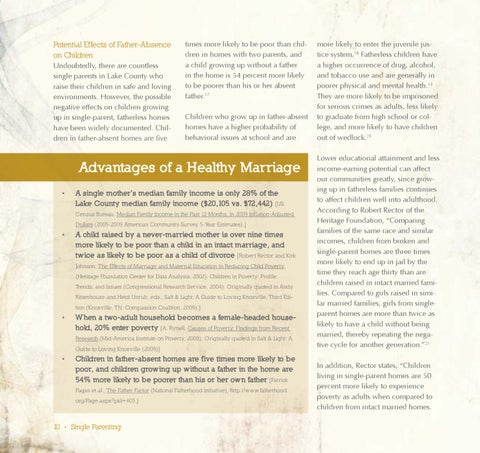 ?^cT]cXP[4UUTRcb^U5PcWTa0QbT]RT ^]2WX[SaT] Undoubtedly, there are countless single parents in Lake County who raise their children in safe and loving environments. However, the possible negative effects on children growing up in single-parent, fatherless homes have been widely documented. ChilKYLUPUMH[OLYHIZLU[OVTLZHYLĂ&#x201E;]L

times more likely to be poor than children in homes with two parents, and a child growing up without a father in the home is 54 percent more likely to be poorer than his or her absent father.17 Children who grow up in father-absent homes have a higher probability of behavioral issues at school and are

Advantages of a Healthy Marriage }

A child raised by a never-married mother is over nine times more likely to be poor than a child in an intact marriage, and twice as likely to be poor as a child of divorce [Robert Rector and Kirk Johnson, The Effects of Marriage and Maternal Education in Reducing Child Poverty, (Heritage Foundation Center for Data Analysis, 2002); Children in Poverty: Profile, Trends, and Issues (Congressional Research Service, 2004). Originally quoted in Andy Rittenhouse and Heidi Unruh, eds., Salt & Light: A Guide to Loving Knoxville, Third Edition (Knoxville, TN: Compassion Coalition, 2009).]

When a two-adult household becomes a female-headed household, 20% enter poverty [A. Rynell, Causes of Poverty: Findings from Recent Research (Mid-America Institute on Poverty, 2008). Originally quoted in Salt & Light: A Guide to Loving Knoxville (2009)]

Children in father-absent homes are five times more likely to be poor, and children growing up without a father in the home are 54% more likely to be poorer than his or her own father [Patrick Fagan et al., The Father Factor (National Fatherhood Initiative), http://www.fatherhood. org/Page.aspx?pid=403.]

more likely to enter the juvenile justice system.18 Fatherless children have a higher occurrence of drug, alcohol, and tobacco use and are generally in poorer physical and mental health.19 They are more likely to be imprisoned for serious crimes as adults, less likely to graduate from high school or college, and more likely to have children out of wedlock.20 Lower educational attainment and less income-earning potential can affect our communities greatly, since growing up in fatherless families continues to affect children well into adulthood. According to Robert Rector of the Heritage Foundation, â&#x20AC;&#x153;Comparing families of the same race and similar incomes, children from broken and single-parent homes are three times more likely to end up in jail by the time they reach age thirty than are children raised in intact married families. Compared to girls raised in similar married families, girls from singleparent homes are more than twice as likely to have a child without being married, thereby repeating the negative cycle for another generation.â&#x20AC;?21 In addition, Rector states, â&#x20AC;&#x153;Children living in single-parent homes are 50 percent more likely to experience poverty as adults when compared to children from intact married homes.