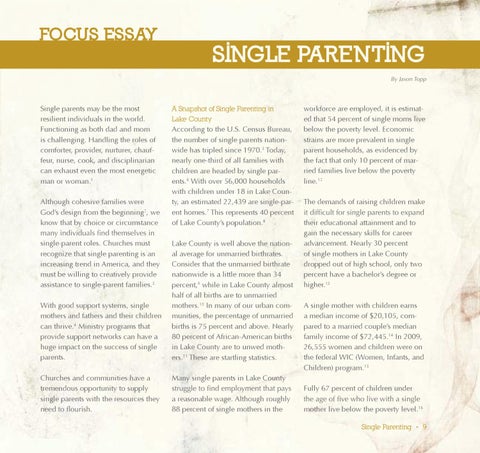 Single parents may be the most resilient individuals in the world. Functioning as both dad and mom is challenging. Handling the roles of comforter, provider, nurturer, chauffeur, nurse, cook, and disciplinarian can exhaust even the most energetic man or woman.1 Although cohesive families were Godâ&#x20AC;&#x2122;s design from the beginning2, we know that by choice or circumstance THU`PUKP]PK\HSZĂ&#x201E;UK[OLTZLS]LZPU single-parent roles. Churches must recognize that single parenting is an increasing trend in America, and they must be willing to creatively provide assistance to single-parent families.3

0B]P_bW^c^UBX]V[T?PaT]cX]VX] Lake County According to the U.S. Census Bureau, the number of single parents nationwide has tripled since 1970.5 Today, nearly one-third of all families with children are headed by single parents.6 With over 56,000 households with children under 18 in Lake County, an estimated 22,439 are single-parent homes.7 This represents 40 percent of Lake Countyâ&#x20AC;&#x2122;s population.8

With good support systems, single mothers and fathers and their children can thrive.4 Ministry programs that provide support networks can have a huge impact on the success of single parents.

Churches and communities have a tremendous opportunity to supply single parents with the resources they ULLK[VĂ&#x2026;V\YPZO

Many single parents in Lake County Z[Y\NNSL[VĂ&#x201E;UKLTWSV`TLU[[OH[WH`Z a reasonable wage. Although roughly 88 percent of single mothers in the

workforce are employed, it is estimated that 54 percent of single moms live below the poverty level. Economic strains are more prevalent in single parent households, as evidenced by the fact that only 10 percent of married families live below the poverty line.12 The demands of raising children make P[KPMĂ&#x201E;J\S[MVYZPUNSLWHYLU[Z[VL_WHUK their educational attainment and to gain the necessary skills for career advancement. Nearly 30 percent of single mothers in Lake County dropped out of high school, only two percent have a bachelorâ&#x20AC;&#x2122;s degree or higher.13 A single mother with children earns a median income of $20,105, compared to a married coupleâ&#x20AC;&#x2122;s median family income of $72,445.14 In 2009, 26,555 women and children were on the federal WIC (Women, Infants, and Children) program.15 Fully 67 percent of children under [OLHNLVMĂ&#x201E;]L^OVSP]L^P[OHZPUNSL mother live below the poverty level.16 BX]V[T?PaT]cX]V}(