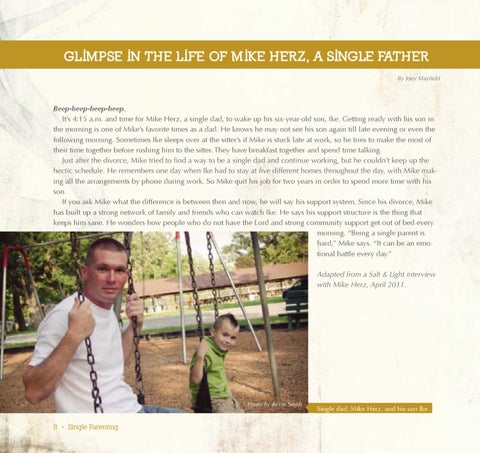 Beep-beep-beep-beep. Itâ&#x20AC;&#x2122;s 4:15 a.m. and time for Mike Herz, a single dad, to wake up his six-year-old son, Ike. Getting ready with his son in the morning is one of Mikeâ&#x20AC;&#x2122;s favorite times as a dad. He knows he may not see his son again till late evening or even the following morning. Sometimes Ike sleeps over at the sitterâ&#x20AC;&#x2122;s if Mike is stuck late at work, so he tries to make the most of their time together before rushing him to the sitter. They have breakfast together and spend time talking. 1\Z[HM[LY[OLKP]VYJL4PRL[YPLK[VĂ&#x201E;UKH^H`[VILHZPUNSLKHKHUKJVU[PU\L^VYRPUNI\[OLJV\SKUÂť[RLLW\W[OL OLJ[PJZJOLK\SL/LYLTLTILYZVULKH`^OLU0RLOHK[VZ[H`H[Ă&#x201E;]LKPMMLYLU[OVTLZ[OYV\NOV\[[OLKH`^P[O4PRLTHRing all the arrangements by phone during work. So Mike quit his job for two years in order to spend more time with his son. If you ask Mike what the difference is between then and now, he will say his support system. Since his divorce, Mike has built up a strong network of family and friends who can watch Ike. He says his support structure is the thing that keeps him sane. He wonders how people who do not have the Lord and strong community support get out of bed every morning. â&#x20AC;&#x153;Being a single parent is hard,â&#x20AC;? Mike says. â&#x20AC;&#x153;It can be an emotional battle every day.â&#x20AC;? (KHW[LKMYVTH:HS[ 3PNO[PU[LY]PL^ ^P[O4PRL/LYa(WYPS