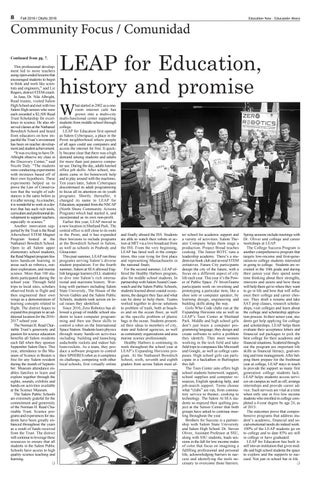 Community Focus / Comunidad Continued from pg. 7. This professional development led to more teachers using open-ended lessons that encouraged students to begin to think and work like scientists and engineers,” said Liz Rogers, district STEM coach. In June, Dr. Nile Albright, Read trustee, visited Salem High School and met with two Salem High seniors who were each awarded a $2,500 Read Trust Scholarship for excellence in science. He also observed classes at the Nathaniel Bowditch School and heard from educators on how impactful the Trust’s investment has been on teacher development and student achievement. “It was exciting to have Dr. Albright observe my class in the Discovery Center,” said Nicole Daly. “The students were conducting experiments with mixtures based off of their own hypothesis. These experiments helped us to prove the Law of Conservation that the weight of substances is the same before as it is after mixing. As a teacher, it is wonderful to work in a district that has such rich tools, curriculum and professional development to support teachers, especially in science.” Another innovation supported by the Trust is the Read Afterschool STEM Magnet Program hosted at the Nathaniel Bowditch School. Open to all Salem upper elementary school students, the Read Magnet program features hands-on learning in areas such as robotics, outdoor exploration, and marine science. More than 100 students participated during the school year. Through field trips to local sites, scholars observed birds in flight and then engineered their own wings as a demonstration of learning concepts related to flight. The district hopes to expand this program to an additional location for the 20162017 school year. The Norman H. Read Charitable Trust’s generosity and passion for science education benefits all Salem residents each fall when they sponsor September Salem Days. This year, attendance to the Museum of Science in Boston is free for any Salem resident during the month of September. Museum attendance enables families to learn and explore together through the sights, sounds, exhibits and hands-on activities available at the Science Museum. The Salem Public Schools are extremely grateful for the commitment and generosity of the Norman H. Read Charitable Trust. Science programs and experiences for students have been greatly enhanced throughout the years as a result of funds received from the Trust. The district will continue to leverage these resources to ensure that all students in the Salem Public Schools have access to high quality science teaching and learning.

hat started in 2002 as a oneroom internet café has grown into a multi-city multi-functional center supporting students from middle school through college. LEAP for Education first opened as Salem Cyberspace, a place in the Point neighborhood where people of all ages could use computers and access the internet for free. It quickly became clear that there was a high demand among students and adults for more than just passive computer use. During the day, adults learned office job skills. After school, students came in for homework help and to play around with the machines. Ten years later, Salem Cyberspace discontinued its adult programming to focus all its attention on its youth programs. Shortly thereafter, it changed its name to LEAP for Education, separated from the NSCAP (North Shore Community Actions Program) which had started it, and incorporated as its own non-profit. Earlier this year, LEAP moved to a new location in Shetland Park. The central office is still close to its roots in the Point, and it has expanded their horizons to include programs at the Bowditch School in Salem, as well as schools in Peabody and Gloucester. This past summer, LEAP ran three programs serving Salem’s diverse student population. For the fourth summer, Salem at SEA allowed English language learners (ELL students) to dive into Salem’s rich international and maritime history. Working with partners including Salem State University, The House of the Seven Gables and the Salem Public Schools, students took action on local issues they identified. Since 2010, Zero Robotics has allowed a group of middle school students to learn computer programming and then use those skills to control a robot on the International Space Station. Students learn physics through many hands-on activities including building and launching soda-bottle rockets and indoor balloon-rockets. As a team, they produce a software program to control their SPHERES robot as it completes its challenge, competing with other local schools, first virtually online

and finally aboard the ISS. Students are able to watch their robots in action at MIT via a live broadcast from the ISS. From the very beginning, LEAP has fared well in the competition, this year tying for first place and representing Massachusetts in the national finals. For the second summer, LEAP offered the Healthy Harbors program, also for middle school students. In partnership with Salem Sound Coastwatch and the Salem Public Schools, students learned about coastal ecosystems, the dangers they face and what can be done to help them. Teams worked together to devise solutions to problem of trash, both at beaches and on the ocean floor, as well as the specific problem of plastic bags in the ocean. Students presented their ideas to members of city, state and federal agencies, as well as community organizations and area marine science professionals. Healthy Harbors is continuing its work throughout the school year at LEAP’s Expanding Horizons program. At the Nathaniel Bowditch School, sixth, seventh and eighth graders from across Salem meet af-

ter school for academic support and a variety of activities. Salem Theater Company helps them stage a production. Project Bread teaches cooking. The Junior ROTC runs a leadership academy. There’s a student-run book club and several STEM initiatives. Future City participants design the city of the future, with a focus on a different aspect of city life each year. This year it’s the Power of Public Space. JV InvenTeams participants work on inventing and prototyping a particular item, like a shoe sole or computer speaker, by learning design, engineering and building skills along the way. Girls Who Code clubs run at the Expanding Horizons site as well as LEAP’s Teen Center at Shetland Park. Middle and high school girls don’t just learn a computer programming language, they design and create software to solve a problem they identify. They meet women working in the tech field and take field trips to companies like Microsoft and Google, as well as college campuses. High school girls can participate in a hackathon in Burlington this fall. The Teen Center aslo offers high school students homework support, school supplies and computer resources, English speaking help, and job-search support. Teens choose what “clubs” are run, from community service to theater, cooking to technology. The Salem At SEA students so enjoyed their quilting project at the Senior Center that both groups have asked to continue meeting throughout the year. Brothers for Success is a partnership with Salem State University and Salem High School. Dr. Steven Oliver, Assistant Professor at SSU, along with SSU students, leads sessions in the fall for low income males of color that focus on imagining a fulfilling professional and personal life, acknowledging barriers to success and identifying the tools necessary to overcome those barriers.

Spring sessions include meetings with Dr. Oliver and college and career workshops at LEAP. The College Success Program is another comprehensive program that targets low-income and first-generation-to college students interested in going to college. Students are recruited in the 10th grade and during their junior year they spend some time thinking about their strengths, interests and assets and how these will help them get to where they want to go in life and how that will influence their college and career choices. They draft a resume and take SAT prep classes, research scholarships, visit colleges and learn about the college and scholarship application process. In their senior year, students get help applying for college and scholarships. LEAP helps them evaluate their acceptance letters and financial aid packages to pick the best college for their academic and financial situations. Scattered throughout the program are important life skills as financial literacy, goal-setting and time management. After helping them prepare for the freshman year at college, LEAP stays in touch to provide the support so many first generation college students lack. LEAP helps students access services on campus as well as off, arrange internships and provide career advice. Such services are vital at a time when only one in five low income students who enrolled in college completed a 4-year degree by age 24, as of 2013. The outcomes prove that comprehensive programs that address student’s academic, financial and social-emotional needs do indeed work. 100% of the LEAP students go on to college and to date 85% are still in college or have graduated. LEAP for Education has built itself into an institution that gives middle and high school students the space to explore and the supports to succeed. Not just in school but in life. Founded in 1994, The Salem Education Foundation (SEF) is a non-profit organization dedicated to promoting community involvement and financia...

Founded in 1994, The Salem Education Foundation (SEF) is a non-profit organization dedicated to promoting community involvement and financia...