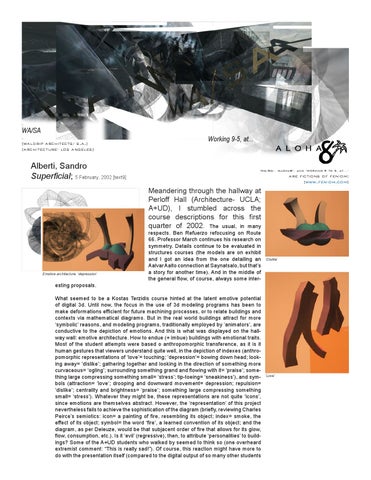 Meandering through the hallway at Perloff Hall (Architecture- UCLA; A+UD), I stumbled across the course descriptions for this first quarter of 2002. The usual, in many

respects. Ben Refuerzo refocusing on Route 66. Professor March continues his research on symmetry. Details continue to be evaluated in structures courses (the models are on exhibit and I got an idea from the one detailing an Aalvar Aalto connection at Saynatsalo, but that’s a story for another time). And in the middle of the general flow, of course, always some inter-

What seemed to be a Kostas Terzidis course hinted at the latent emotive potential of digital 3d. Until now, the focus in the use of 3d modeling programs has been to make deformations efficient for future machining processes, or to relate buildings and contexts via mathematical diagrams. But in the real world buildings attract for more ‘symbolic’ reasons, and modeling programs, traditionally employed by ‘animators’, are conductive to the depiction of emotions. And this is what was displayed on the hallway wall: emotive architecture. How to endue (+ imbue) buildings with emotional traits. Most of the student attempts were based o anthropomorphic transference, as it is it human gestures that viewers understand quite well, in the depiction of indexes (anthropomorphic representations of ‘love’= touching; ‘depression’= bowing down head; looking away= ‘dislike’; gathering together and looking in the direction of something more curvaceous= ‘ogling’; surrounding something grand and flowing with it= ‘praise’; something large compressing something small= ‘stress’; tip-toeing= ‘sneakiness’), and symbols (attraction= ‘love’; drooping and downward movement= depression; repulsion= ‘dislike’; centrality and brightness= ‘praise’; something large compressing something small= ‘stress’). Whatever they might be, these representations are not quite ‘icons’, since emotions are themselves abstract. However, the ‘representation’ of this project nevertheless fails to achieve the sophistication of the diagram (briefly, reviewing Charles Peirce’s semiotics: icon= a painting of fire, resembling its object; index= smoke, the effect of its object; symbol= the word ‘fire’, a learned convention of its object; and the diagram, as per Deleuze, would be that subjacent order of fire that allows for its glow, flow, consumption, etc.). Is it ‘evil’ (regressive), then, to attribute ‘personalities’ to buildings? Some of the A+UD students who walked by seemed to think so (one overheard extremist comment: “This is really sad!”). Of course, this reaction might have more to do with the presentation itself (compared to the digital output of so many other students

at the school, these images lack sophistication in form and presentation). But let us not forget a much more sophisticated example of all this: Gehry’s ‘Ginger + Fred’ building in Prague. By combining Gehry’s now-common flows with a representational-emotive quality, this building manages a more effective dialogue with many current viewers (maybe it will be considered ‘limited’ by the robot-people of the future who will also have managed to have ‘killed’ art, but for now it retains an important, I think, characteristic of ‘play’). Apart from the displayed projects, one course description caught my eye: Richter and Erdman to lead the design studio entitled ‘Experiential Products’. The project background goes like this: In the 1970s-80s, Portman ‘Hilton’ hotels characterized the avant-garde: inward-oriented spaces with opened-up cores of circulation spectacle. In the 1990s, hotel lobbies would blend and mix hotel programs and rituals, reflecting a disposition towards more fluidly-programmed public-private spaces. A greater % of square footage began to be allocated to lobbies, reducing the size of guest rooms. Lobbies combine check-in, dining, lounging, working, etc. The future? The Richter-Erdman studio proposes locating lobbies within the hotel curtain walls. Partially attached structural systems with their own infrastructure. Replaceable and ‘snap-on’, these are spaces that negotiate-integrate interior and exterior. Fascinating for me, still, although several of us have been negotiating these types of interstitial conditions for years. One still does not see enough of it in the world. How precisely would these lobbies work? Final reviews in a couple of months. Until then, there are the lectures, of course (Richter was scheduled to lecture at Form Zero on 2-7-2002, evening). Regarding lectures, one of the first ones at A+UD this Winter season was last night by Greg Lynn. There one could catch a glimpse of one possible façade distribution (his studio, Form, had worked on a project that worked with folded and flowing continuous surface on the interior of a high-rise, to distinguish between office and gallery spaces, but this ended up not being feasible, so their final proposal focused entirely on a deformation of the front façade. This might be how a hotel lobby of the future could begin to emerge. The lecture was also instructive in regards to the ‘futuristic’ methods Greg Lynn has continued to standardize in his oeuvre, as well as his thoughts on architectural practice: 1. Architects should combine practice and academia. Architecture in practice is fundamentally conservative. It is too costly to experiment with architecture in practice. Young architects today teach in order to obtain power or tap into a knowledge base [I seem to have missed pedagogy here, but Thom Mayne was blocking my view]. 2. It becomes ever more feasible to prototype fluid digital forms. In LA there are many subcontractors who produce these now, primarily for the automobile industry. 3. The first prototyped form Greg Lynn (and the world?) saw was the Ford Taurus. Like some attempts at contemporary architecture, it was awful, yet ‘beautiful’ (inspiring) because it was representative of future potential we are only now beginning to see. 4. The contemporary excitement of repetition still exists, but is not the same as that of the ‘Classical Modernists’. Now called ‘sameness’, it is a repetition that addresses both similarity and difference (forms can now be produced that are different from each other, yet similar because they all fall within one same range of form). 5. Greg Lynn Form has developed particular standardized methods to work with digital sur-

faces: marking features, blobs (linked nodes), webs, shreds (cutting into surfaces), and guest relations (surfaces fold in and out to generate enclosed ‘separate’ spaces). 6. Basing theory on the digital realm allows for a theory that is more popular-populist than most of the philosophical-textual theory we are now used to. I certainly was inspired by Form’s forms. Would love to be able to create a building in one day, and prototype it, like those Embryonic Houses. For now, though, I live within the envelope of my very own reality. And this weekend is Candelaria (the Mexican holiday following in the steps of January’s Day of Kings), a day to distribute tamales around town.

A graduate course by Kostas Terzidis hints at the latent emotive potential of digital 3d (and the ways this could be applied to architecture...

A graduate course by Kostas Terzidis hints at the latent emotive potential of digital 3d (and the ways this could be applied to architecture...