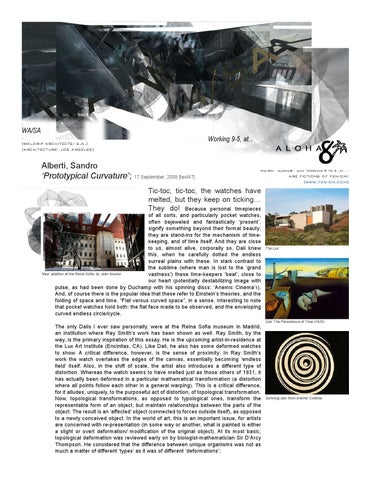 Tic-toc, tic-toc, the watches have melted, but they keep on ticking… They do! Because personal timepieces

of all sorts, and particularly pocket watches, often bejeweled and fantastically ‘present’, signify something beyond their formal beauty; they are stand-ins for the mechanism of timekeeping, and of time itself. And they are close to us, almost alive, corporally so. Dali knew this, when he carefully dotted the endless surreal plains with these. In stark contrast to the sublime (where man is lost to the ‘grand ‘New’ addition at the Reina Sofia- by Jean Nouvel. vastness’) these time-keepers ‘beat’, close to our heart (potentially destabilizing image with pulse, as had been done by Duchamp with his spinning discs: ‘Anémic Cinéma’1). And, of course there is the popular idea that these refer to Einstein’s theories, and the folding of space and time. “Flat versus curved space”, in a sense. Interesting to note that pocket watches hold both: the flat face made to be observed, and the enveloping curved endless circle/cycle. The only Dalis I ever saw personally, were at the Reina Sofia museum in Madrid, an institution where Ray Smith’s work has been shown as well. Ray Smith, by the way, is the primary inspiration of this essay. He is the upcoming artist-in-residence at the Lux Art Institute (Encinitas, CA). Like Dali, he also has some deformed watches to show. A critical difference, however, is the sense of proximity: In Ray Smith’s work the watch overtakes the edges of the canvas, essentially becoming ‘endless field’ itself. Also, in the shift of scale, the artist also introduces a different type of distortion. Whereas the watch seems to have melted just as those others of 1931, it has actually been deformed in a particular mathematical transformation (a distortion where all points follow each other in a general warping). This is a critical difference, for it alludes, uniquely, to the purposeful act of distortion, of topological transformation. Now, topological transformations, as opposed to typological ones, transform the representable form of an object, but maintain relationships between the parts of the object. The result is an ‘affected’ object (connected to forces outside itself), as opposed to a newly conceived object. In the world of art, this is an important issue, for artists are concerned with re-presentation (in some way or another, what is painted is either a slight or overt deformation/ modification of the original object). At its most basic, topological deformation was reviewed early on by biologist-mathematician Sir D’Arcy Thompson. He considered that the difference between unique organisms was not as much a matter of different ‘types’ as it was of different ‘deformations’:

“… A method of Cartesian deformation was developed in 1917 by the morphologist D’Arcy Thompson to describe the transformations of natural form in response to environmental forces. Thompson provisionally aligned bodies and measure in such a way that particular dissymmetries and disproportions were maintained as events within a deformable, supple, and irreducible geometric system of description. Geometry is no longer a static measure of invariant and unitary characteristics, but becomes what Gilles Deleuze and Felix Guattari have referred to as a “plane of consistency” on which differential transformations and deformations occur… In this manner, the type or spatial organism is no longer seen as a static whole separate from external forces, but rather as a sensibility continuously transforming through its internalization of outside events…” [Lynn, Greg; Multiplicitous and Inorganic Bodies; Assemblage 19; 1992 ] In the case of a work like ‘Mysteriuminiquitatis ’, when Ray Smith shows us a deformed watch, he allows us to discern a general sense of the transformation, as well as the original object. ‘Watch’ carefully and you can almost see the way in which the traditional arrangement is made to warp. We can imagine this because we all know the way in which time-telling numbers are arranged, in a circle, from 1 to 12. Although this could also be said of Dali’s works, here an equirectangular set of points appears to be mapped cleanly to a spherical ‘pinch’. The original pocket watch is very changed, melted, deformed, but it is due to a clear, straightforward transformation. Computers do this very easily. In Photoshop, one can use something like Flaming Pear’s ‘Flexify’ filter to achieve a direct equirectangular-to-spherical transformation. And, so, where objects in paintings appear to be faithful copies of the original (but are not quite the same), here the object seems to be transformed totally but is still ‘the same’. On Digital Craft Were it that simple. For we can’t ignore that the transformation, once achieved by the computer, is re-created in painting by the hand of the artist. These are copies of copies, or, more particularly, copies of simulacra. The first, as we have seen, rather than ‘recreation’, is a ‘transformation’; thus: simulacrum (effectively the same as the original, but in a different role). The second representation, when the artist takes the computer image and repaints it on canvas, is necessarily a copy, as it exits the hermetic environment of bits and bytes (recreated as a different ‘type’). In the first case, the re-presentation is topological (same thing, different shape). In the latter step, it is typological (different thing; different material; unique conception): the topological transformation is now seen for itself, as a type to be highlighted in its formal representation. This is different from what, say, hypermedia theorist Marcos Novak recently achieved in his exhibit of ‘Turbulent Topologies’ at the Venice Biennale. In Marcos Novak’s spherical and melted forms, there is not only the sense of an original topological deformation, but also of an imbued dynamism. As in the work of Ray Smith, the final forms are also modifications of topology. There is a first step (topological deformation), but then the second step is actually a return to the original form and to the mathematics of the transformation itself, to achieve, in the end, a guided deformation: one that will balance the thinness and thickness of curvatures to yield a form that feels both inhabitable and dynamic (reflecting Novak’s ‘architectural’ concerns). In some of Ray Smith’s works, such as ‘5:48 am’, even the original topological transformation is likely affected by the subjective hand of the artist, for such related filters as Photoshop’s ‘Liquify’ depend on the author to ‘melt’ in varied strokes. So we see that there is a sense of purpose here, to show the effect of the artist’s sensibility in the process. Perhaps as a reaction to the sense that even a computer-generated

image (or form) is never itself ‘pure’ (computers are merely tools to transform [/use] mathematics in[to] human sensibility). Or perhaps, as in the case of heterologists versus surrealists, a ‘call to action’ (to excision 2; or to the necessary risk/ error of ‘craft’ 3). Authors like Poly Ullrich note that only through constant mediation and risk can we achieve works with subtlety, richness, and variety in formal elements, that deepen upon inspection. (see note 3). Slight improvisations and irregularities, with contrast and tension between them, from the smallest visible scale on up, are what vitalize and individualize art. This, in a sense, is what we find in Ray Smith’s watches (and quite obviously so, as we see that the artist purposefully adds rough patches of brush strokes where the light is most intense). But perhaps we can also think of it, not quite as an issue of the misinterpretation of a mathematical ideal. Rather, it could be seen as an intensifying of the already inherent sense of multiplicitous, fluid time in these works (if the warping of the watch already denoted the bending of space-time, its representation by hand includes the time-process of the representation—the time and effort it took to re-present the image as a work of art). There is time distortion within and without these paintings. So Close and Far And as these works involve us within both conceptual and physical frameworks of time, the correlated sense of space is also called into action. Because we stand close to the paintings, we can sense the physicality of the brush strokes. Further, we feel compelled to look close, since the subject matter is a zoom-macro shot of something that is normally distant, small, removed. In ‘5:48 am’ and ‘Infinite Father’, we are inside the watch, or, better, somewhere very close yet not quite there. The reflections, and the distortions, presuppose observation through some intermediary lens. Text and numbers, mirrored, or flowing upside down, lead us to become ever more closely involved. We are here and there, outside and inside, simultaneously (in a sense, as at the edge of a black hole, connecting between our universe and another).

1. The significance of Duchamp’s disc-pulses is well explained by Rosalind Krauss in the ‘Moteur!’ chapter of ‘Informe’ (1997). Although the full destabilizing effect is antithetical to Dali’s orderly and representational Surrrealism, the watches stand there, nonetheless, with conceptual potential for ‘pulse’. 2. Dialectic isolates in order to compare, but the re-unifies. Excision, on the other hand, is the attempt to separate permanently (or to a greater extent; heterology). Only through excision (which is unfortunately not attainable in formal reality), can one achieve the potential of representation. 3. In ‘Workmanship of Risk’ (1998), Poly Ullrich refers to workmanship of risk: workmanship using any kind of technique or apparatus in which the quality of the result is not predetermined, but depends on the judgement, dexterity, and care which the maker exercises as he works. Only through the workmanship of risk is it possible to reveal the sense of life and moment-by-moment human decision that is recorded in the process of making.

Review of Ray Smith's art exhibit at the Lux Art Institute (Encinitas, CA). Focus on Smith's series of melted watches, and the relationship...

Review of Ray Smith's art exhibit at the Lux Art Institute (Encinitas, CA). Focus on Smith's series of melted watches, and the relationship...