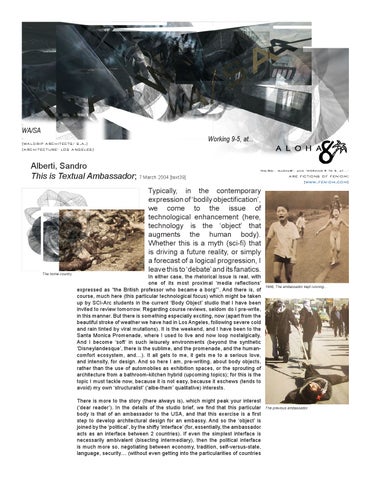 Typically, in the contemporary expression of ‘bodily objectification’, we come to the issue of technological enhancement (here, technology is the ‘object’ that augments the human body). Whether this is a myth (sci-fi) that is driving a future reality, or simply a forecast of a logical progression, I leave this to ‘debate’ and its fanatics.

In either case, the rhetorical issue is real, with one of its most proximal ‘media reflections’ expressed as “the British professor who became a borg”1. And there is, of course, much here (this particular technological focus) which might be taken up by SCI-Arc students in the current ‘Body Object’ studio that I have been invited to review tomorrow. Regarding course reviews, seldom do I pre-write, in this manner. But there is something especially exciting, now (apart from the beautiful stroke of weather we have had in Los Angeles, following severe cold and rain tinted by viral mutations). It is the weekend, and I have been to the Santa Monica Promenade, where I used to live and now loop nostalgically. And I become ‘soft’ in such leisurely environments (beyond the synthetic ‘Disneylandesque’, there is the sublime, and the promenade, and the humancomfort ecosystem, and…). It all gets to me, it gets me to a serious love, and intensity, for design. And so here I am, pre-writing, about body objects, rather than the use of automobiles as exhibition spaces, or the sprouting of architecture from a bathroom-kitchen hybrid (upcoming topics); for this is the topic I must tackle now, because it is not easy, because it eschews (tends to avoid) my own ‘structuralist’ (‘albe-them’ qualitative) interests. There is more to the story (there always is), which might peak your interest (‘dear reader’). In the details of the studio brief, we find that this particular body is that of an ambassador to the USA, and that this exercise is a first step to develop architectural design for an embassy. And so the ‘object’ is joined by the ‘political’, by the shifty ‘interface’ (for, essentially, the ambassador acts as an interface between 2 countries). If even the simplest interface is necessarily ambivalent (bisecting intermediary), then the political interface is much more so, negotiating between economy, tradition, self-versus-state, language, security… (without even getting into the particularities of countries

such as Mexico, where the entire political organization is founded on hidden meanings, going as far back as the ‘war of images’2). Any of these interface issues could be tackled through various procedures, although, today, I expect the implications of a technological object. The object that is fitted to the ambassador, and interfaces beyond body, might affect perception, the transmission of messages, the control of data. This reminds me of another important ‘attractor’ at the Promenade this weekend: the distribution of Internet-access hot-spots (2 Starbucks in a row, + Borders, and a T-Mobile node at the corner). Wi-Fi, in particular, can easily act as springboards for investigation: 1. Wi-Fi network access is granted through utility software. At base level, there is already a translator (‘middleman’) between audience and ambassador3. [see below, regarding translation; “what did the ambassador want?”] 2. The maximum speed of a network is limited to the slowest speed of its users (would the ambassador have private access? Would there be a ‘democratic’ requirement to permit shared usage? How might the possible overload affect the ambassador’s communications?) 3. Access points are necessary every 100-300 feet. Also, larger and faster data transfers occur closer to an access point (1 MBps only available within 50’). How might this affect the ambassador’s mobility and rituals? 4. In order to avoid interference from other Wi-Fi networks, one must choose unique channels. 5. Typically, signals need to be enhanced by antennas and signal-boosters. How would this affect the ambassador’s paraphernalia? 6. Security and sharing are very much affected in this context, where intrusions have come to be know ‘fondly’, as “Wi-Fi hacking” or “bandwidth squatting”. On the side of security, ‘The Hacker Quarterly’ describes the issue as “scary” (and then goes on to describe specific ways in which one might access networks, most of which seem to run with default password settings4). But there is also another side of the coin here: ‘democratic access’; consider that many private parties offer free access throughout (to the point of establishing impromptu data-access parks complete with benches and decorative plants). Sharing has become fashionable. Would you share? Would the ambassador share? 7. An emerging trend is to privilege certain data transfers over others (text versus multimedia versus video, etc.). How might this distinction be extended to the various ‘types’ the ambassador deals with? (races, genders, ages, etc.) Regarding translation: what did the ambassador want? However and whatever much the ambassador may desire to express, what gets through is very much up to the medium and the receptor5. Regarding the medium, there are options: • The private translator, power behind the throne. Whether this be a human or digital ‘object’, who knows what actually was traduced? Is there intent and/or accident to consider, on the part of the translator? Many of us remember O-Ren Ishii, Bill’s ambassador to Japan, during her famous speech. Her actions seemed to speak for themselves, but all of the following needed to be translated to Japanese by Sofie Fatale [was the translation faithful?]:

“I’m going to say this in English so you know how serious I am. As your leader, I encourage you to - from time to time and always in a respectful manner, and with the complete knowledge that my decision is final -- to question my logic. If you’re unconvinced a particular plan of action I’ve decided is the wisest, tell me so. But allow me to convince you. And I will promise you, right here and now, no subject will be taboo...except the subject that was just under discussion. The price you pay for bringing up either my Chinese or my American heritage as a negative is, I collect your fuckin head. Just like this fucker here. Now if any of you sonsabitches got anything else to say, now’s the fuckin time”. [click-a-listen here]

• Popular media as translator: “One day, Richard might decide to visit a refugee camp or hang around Gaza. Perhaps he’ll watch settlers harass a helpless Palestinian farmer, see the look in the eye of a child whose father is humiliated by a soldier, see a bulldozer run over an unarmed peace activist, see for himself what 36 years of military occupation really means. I wonder if he still will see the people as ‘interesting problems.’ Until that happens, what can I tell him? Maybe my silence will make him curious about a reality not revealed by CNN.” [Elen Ghulam; Activist, CanPalNet] • And there is digital translation: Radio-frequency ID is coming (products emit signals from inside consumer’s homes, eliciting customized TV ads). • And clothing, the age-old interface between body and world: Philips Research Lab: Wearable Electronics [full paper available at www.research.philips.com/Assets/Downloadablefile/passw3_4-1110.pdf] Securing the ambassador. • There is physical security, certainly: Free Trade Area of the Americas meeting, Miami: $8.5 million were allocated to security. The blocks around the amphitheater were clogged with riot police. Intersections were shut down- only a string of 3 or 4 people could pass at a time. Businesses had been closed for nearly a week. The city had passed an ordinance making it illegal for more than 8 people to gather on the streets. Outside, helicopter hovered overhead, senior citizens were attacked by police, a young boy was knocked backwards and stunned after he knelt to pray, police officers began shooting rubber bullets at protesters walking backwards with their hands up. Inside, Canada’s prime minister remarked that he was unfazed by the protests, because he couldn’t see or hear them. [‘security’ affects ‘translation’] • And there is digital security, as aforementioned and footnoted. The ambassador as representamen. • Persona: “If you looked you could see the evidence, even in the whitened skeletons. The legs bent and apart. A broken bottle, a rough branch, even a knife between them. Where the bodies were fresh, we saw what must have been semen pooled on and near the

dead women and girls. There was always a lot of blood. Some male corpses had their genitals cut off, but many women and young girls had their breasts chopped off, and their genitals crudely cut apart. For many years after I came home, I banished the memories of those faces from my mind, but they have come back, all too clearly.” [from an ambassador’s memoirs] • Politicians attempt to neutralize their personal selves (as do judges, teachers, theorists) in subjugation to their representative value. Does this have to be so? • The ambassador not only represents a country, but a political structure, headed by men such as Gonzalez Sánchez de Lozada (President of Bolivia whose poorly-planned privatization policies lost the country’s profits to foreigners; riots left 65 protestors dead and led to Sánchez de Lozada’s resignation), or Hugo Sánchez (President of Venezuela who rose against the oligarchy to bring meals to the poor, land reform, and universal health care; in 2002, business leaders had him kidnapped at gunpoint), or Luis Ignácio Lula da Silva (President of Brazil who is on a quest to dissolve the US assumption of leadership in world trade). And of course [note to the students] this aims at an architectural interface, which goes to the issue of layering, or transition. How do you formalize all this? (I hope to see tomorrow) How do you make architecture from it? (upcoming; ‘The ambassador at the embassy’)

Endnotes 1. “On the 14th of March 2002 a 100-electrode array was surgically implanted into the median nerve fibers of the left arm of Professor Kevin Warwick. Professor Warwick was able to control an electric wheelchair and an intelligent artificial hand using this neural interface. The implant was also able to create artificial sensation by stimulating individual electrodes within the array.” [www.kevinwarwick.org] [return to page1] 2. In his ‘War of Images’ (1990), Sergei Grunski proposes (and, from my personal experience as Mexican citizen, I wholeheartedly agree) that Europeans attempted to take over Mexico through the power of imagery (evolving from the original saintly statuary to the Virgin Mary as printing-press reproduction). But the natives had already been accustomed to images with transitory meanings (meaning/truth has always been subjective to ‘localized’ Mexicans). [return to page2] 3. “Most of Web communication in today’s ‘secure’ Internet is protected by a set of protocols that is quite strong… But this is dependent on the safe distribution of keys… The problem is not about ciphers (they are quite strong). The weak point is key distribution… It is possible to trick a lot of Certification Authorities into issuing a certificate when they really shouldn’t…” [‘Whom do You Trust?’; 2600- the Hacker Quarterly; Winter 2003-2004] [return to page2] 4. All one needs to do is pick up a signal, with the help of software such as www.netstumbler.com or intel.jwire.com or www.cisco.com/pcgi-bin/cimo.home… And then try the default usernames and passwords (many network administrators don’t bother to change them; for my own Netgear WGT624 card has a private password, but for most cards the default username=admin and password=admin; IP address 192.168.0.1). You can also ‘crack’ a private password, with Airsnort (www.shmoo.com). And then navigate without being detected, with the software at www.kismetwireless.net [return to page2] 5. The ambassador is only as good as his/her tongue; “During the ancient Assyrian empire, officials found the ripping out of tongues helped subjugate the enemy” [Adbusters; 4-2004] [return to page2]

This is Textual Ambassador

Review of the Body Object studio, in which space is developed around the contextual needs of a user.

This is Textual Ambassador

Review of the Body Object studio, in which space is developed around the contextual needs of a user.