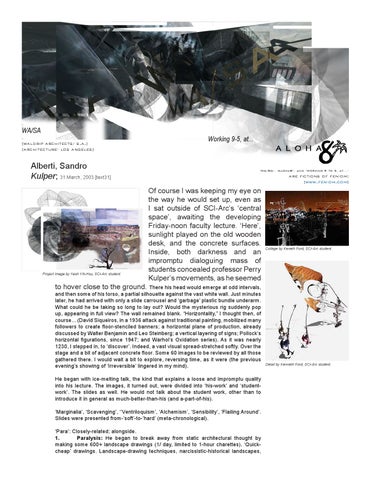 Of course I was keeping my eye on the way he would set up, even as I sat outside of SCI-Arc’s ‘central space’, awaiting the developing Friday-noon faculty lecture. ‘Here’, sunlight played on the old wooden desk, and the concrete surfaces. Inside, both darkness and an impromptu dialoguing mass of students concealed professor Perry Kulper’s movements, as he seemed

to hover close to the ground. There his head would emerge at odd intervals,

and then some of his torso, a partial silhouette against the vast white wall. Just minutes later, he had arrived with only a slide carrousel and ‘garbage’ plastic bundle underarm. What could he be taking so long to lay out? Would the mysterious rig suddenly pop up, appearing in full view? The wall remained blank. “Horizontality,” I thought then, of course... (David Siqueiros, in a 1936 attack against traditional painting, mobilized many followers to create floor-stenciled banners; a horizontal plane of production, already discussed by Walter Benjamin and Leo Steinberg; a vertical layering of signs; Pollock’s horizontal figurations, since 1947; and Warhol’s Oxidation series). As it was nearly 1230, I stepped in, to ‘discover’. Indeed, a vast visual spread-stretched softly. Over the stage and a bit of adjacent concrete floor. Some 60 images to be reviewed by all those gathered there. I would wait a bit to explore, reversing time, as it were (the previous evening’s showing of ‘Irreversible’ lingered in my mind). He began with ice-melting talk, the kind that explains a loose and impromptu quality into his lecture. The images, it turned out, were divided into ‘his-work’ and ‘studentwork’. The slides as well. He would not talk about the student work, other than to introduce it in general as much-better-than-his (and a-part-of-his). ‘Marginalia’, ‘Scavenging’, ‘’Ventriloquism’, ‘Alchemism’, ‘Sensibility’, ‘Flailing Around’. Slides were presented from-’soft’-to-’hard’ (meta-chronological). ‘Para’: Closely-related; alongside. 1. Paralysis: He began to break away from static architectural thought by making some 600+ landscape drawings (1/ day, limited to 1-hour charettes). ‘Quickcheap’ drawings. Landscape-drawing techniques, narcissistic-historical landscapes,

organic forms. The floor pieces form part of these. 2. Paraphernalia: Equipment, trappings, gear that one acquires. Inspirational-influential visions. A series of slides including items such as overlapping kanji + Japanese imagery, gridded/ pleated work, old barber shop interior in sunlight, x-ray of bones and cast, leaf-insects hopelessly camouflaging in white background, hole in stone-block wall (missing block element allows view through), bunch of piled-up origami, neon sign in daylight (creating shadows and transparency on wall), bamboo forest, symbolic morphing, surveying notes, soft textures and light. 3. Parallels: (still ‘soft’) Series of photos exploring change, duration, ambiguity, viewpoint, emergence, dynamics. Many pictures, literally ‘soft’ (time-lapse blurs). Or, ‘interesting things’ (such as a close-up of an orchid), of ‘killer whales’ (sectional organizational unfamiliar conditions; one ended up looking like a ‘whale’). ‘hybrid landscapes’ (terrain-to-furniture), ‘intimate and real topographies’ (relationship between the imminent and the real), ‘aspectual drawings’ (inflections that deal with aspects: emptiness, locality, adjacency,…). 4. Parasite/ Parasight: A long, narrow room replete with surface application/ influence that deals with theme and context (a street front on one end, a graveyard on the other). 1994 interior design. + various other projects for homes and urban stimulus. A house in the desert connects to the distant mountains via outline, and the local context through color. 5. Paranoia: Conjuring something from the outside. In an island off the NY coast, we find landings for mythical sea travelers. The piers are gills to catch ships, which adjacent labs analyse. Nearby, a metamorphic rock garden and surveillance field. The Fresno Museum, another project in the same range, responds to an augmented program. Electronic marionettes, beauty pageants for animals, and rhetorical muses. Architecture is expanded through ‘other-roles’ in programming. 6. Paranormal: Outside and inside the norm. There is a normalcy to various aspects of this work, necessary for transmission to clients, builders, etc. These notes and drawings do not remain ‘innocent’, however. They are used later to stimulate the projects (they are ‘re-scanned’). 7. Parameters: Usually these are dealt with at the surface, but it is more interesting if they propagate ‘other’ (‘evocative parameters’; in order to arrive at these, it is important to examine their ‘raison d’etre’). 8. Paradox: It is interesting to note that the articulation of terms is quite particular, even within one same architectural field. Intensity, saturation, atmospherics, etc. Many times, conflicting terms are used in similar ways, or similar terms in conflicting ways. 9. Paradigm: Constantly emerging deep structure. One same idea can be re-presented in various ways, helping to develop a level of intuitive familiarity and even a springboard to extrapolation (in the NY island, local spaces are presented as isolated ‘islands’). Leave precise material logic/ selection to the end, while always considering important generalities such as ‘hardness’, ‘support’, ‘warmth’, ‘access’, ‘view’.

Perry Kulper is well loved and esteemed because he can inspire, produce, and project. This essay captures some of his drawings, which in tur...

Perry Kulper is well loved and esteemed because he can inspire, produce, and project. This essay captures some of his drawings, which in tur...