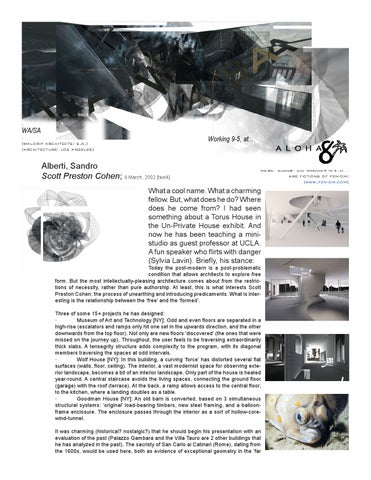 What a cool name. What a charming fellow. But, what does he do? Where does he come from? I had seen something about a Torus House in the Un-Private House exhibit. And now he has been teaching a ministudio as guest professor at UCLA. A fun speaker who flirts with danger (Sylvia Lavin). Briefly, his stance:

Today the post-modern is a post-problematic condition that allows architects to explore free form. But the most intellectually-pleasing architecture comes about from the restrictions of necessity, rather than pure authorship. At least, this is what interests Scott Preston Cohen: the process of unearthing and introducing predicaments. What is interesting is the relationship between the ‘free’ and the ‘formed’. Three of some 15+ projects he has designed: · Museum of Art and Technology [NY]: Odd and even floors are separated in a high-rise (escalators and ramps only hit one set in the upwards direction, and the other downwards from the top floor). Not only are new floors ‘discovered’ (the ones that were missed on the journey up). Throughout, the user feels to be traversing extraordinarily thick slabs. A tensegrity structure adds complexity to the program, with its diagonal members traversing the spaces at odd intervals. · Wolf House [NY]: In this building, a curving ‘force’ has distorted several flat surfaces (walls, floor, ceiling). The interior, a vast modernist space for observing exterior landscape, becomes a bit of an interior landscape. Only part of the house is heated year-round. A central staircase avoids the living spaces, connecting the ground floor (garage) with the roof (terrace). At the back, a ramp allows access to the central floor, to the kitchen, where a landing doubles as a table. · Goodman House [NY]: An old barn is converted, based on 3 simultaneous structural systems: ‘original’ load-bearing timbers, new steel framing, and a balloonframe enclosure. The enclosure passes through the interior as a sort of hollow-corewind-tunnel. It was charming (historical? nostalgic?) that he should begin his presentation with an evaluation of the past (Palazzo Gambara and the Villa Tauro are 2 other buildings that he has analyzed in the past). The sacristy of San Carlo ai Catinari (Rome), dating from the 1600s, would be used here, both as evidence of exceptional geometry in the ‘far

past’, as well as to make the audience comfortable with his ‘dependent’ references to exemplary architecture. Typically this type of architecture would have rounded windows piercing directly outwards at 4 corners, but since this sacristy is located within an orthogonal building, this would have pierced ‘oddly’ (asymmetrically) through a corner of the outer building, instead of its façade. So the round openings are ‘slip-stitched’ ‘around’ the corner of the outer envelope, from façade to façade. This move manages to maintain a symmetric rigor/rhythm on the outer facades, but depends on a geometric process that is not ‘of its time’. The ‘angled elliptical openings’ pierce only tangentially to the rounded perimeter of the inner basilica. Oddly enough, this ‘weirdness’ manages to improve on the original ‘idea’ of basilica lighting, as it is doubly indirect, due to the wall thickness and the elimination of any vistas around a bend (the more indirect the lighting, the more ‘heavenly’). The example of the flatfish (heterosomata), of course, was also cute (I always enjoy seeing examples of ‘natural’ weirdness). This is a fish that begins its life swimming perpendicular to the ocean floor, but as it matures, its habits require it to swim close to the ocean floor. So it adapts, with its body rotating to a position parallel to the ocean floor, and both eyes move to one side of its former face. Since this is one of my longer ‘writings’, it is obvious that I am enthralled by all this (the topic itself is also lengthy, as it subsists on plenty of explanation). I will conclude here by mentioning that I like this process (deforming and making the deformation evident) as much as I do like spontaneous generation of deformations, and even the simpler play of modifying only one or a few of an element’s attributes (scale, color, etc.). As long as there is play, there is life. It might be worthwhile to see what else he has to share in ‘Contested Symmetries’ (2001) and ‘Permutations of Descriptive Geometry’ (forthcoming description of Garpard Monge’s 18th-century descriptive geometry, relationships between 2d and 3d, explicit links between formal configurations and their projections, etc.).

Review of presentation by Preston Scott Cohen at UCLA A+UD.

Review of presentation by Preston Scott Cohen at UCLA A+UD.