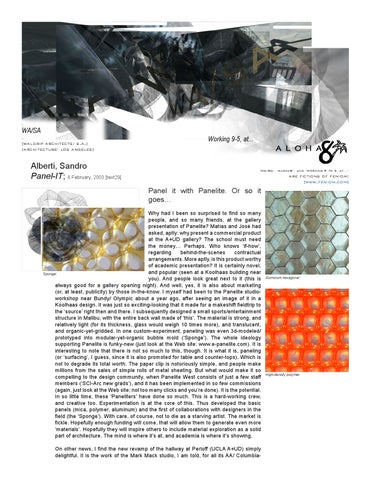 Panel it with Panelite. Or so it goes… Why had I been so surprised to find so many people, and so many friends, at the gallery presentation of Panelite? Matías and José had asked, aptly: why present a commercial product at the A+UD gallery? The school must need the money… Perhaps. Who knows ‘if-how’, regarding behind-the-scenes contractual arrangements. More aptly, is this product worthy of academic presentation? It is certainly novel, and popular (seen at a Koolhaas building near ‘Sponge’. you). And people look great next to it (this is always good for a gallery opening night). And well, yes, it is also about marketing (or, at least, publicity) by those in-the-know. I myself had been to the Panelite studioworkshop near Bundy/ Olympic about a year ago, after seeing an image of it in a Koolhaas design. It was just so exciting-looking that it made for a makeshift fieldtrip to the ‘source’ right then and there. I subsequently designed a small sports/entertainment structure in Malibu, with the entire back wall made of ‘this’. The material is strong, and relatively light (for its thickness, glass would weigh 10 times more), and translucent, and organic-yet-gridded. In one custom-experiment, paneling was even 3d-modeled/ prototyped into modular-yet-organic bubble mold (‘Sponge’). The whole ideology supporting Panelite is funky-new (just look at the Web site: www.e-panelite.com). It is interesting to note that there is not so much to this, though. It is what it is, paneling (or ‘surfacing’, I guess, since it is also promoted for table and counter-tops). Which is not to degrade its total worth. The paper clip is notoriously simple, and people make millions from the sales of simple rolls of metal sheeting. But what would make it so compelling to the design community, when Panelite West consists of just a few staff members (‘SCI-Arc new grads’), and it has been implemented in so few commissions (again, just look at the Web site; not too many clicks and you’re done). It is the potential. In so little time, these ‘Paneliters’ have done so much. This is a hard-working crew, and creative too. Experimentation is at the core of this. Thus developed the basic panels (mica, polymer, aluminum) and the first of collaborations with designers in the field (the ‘Sponge’). With care, of course, not to die as a starving artist. The market is fickle. Hopefully enough funding will come, that will allow them to generate even more ‘materials’. Hopefully they will inspire others to include material exploration as a solid part of architecture. The mind is where it’s at, and academia is where it’s showing. On other news, I find the new revamp of the hallway at Perloff (UCLA A+UD) simply delightful. It is the work of the Mark Mack studio, I am told, for all its AA/ Columbia-

esque quality of â&#x20AC;&#x2DC;Modernityâ&#x20AC;&#x2122;. This is some of what the students are reflecting (the shadows on the wall of the cave). Segmentation in bright orange (Pantone 021C?); disintegration; neo-neon; and diagrammed space. Here we are. There we go.