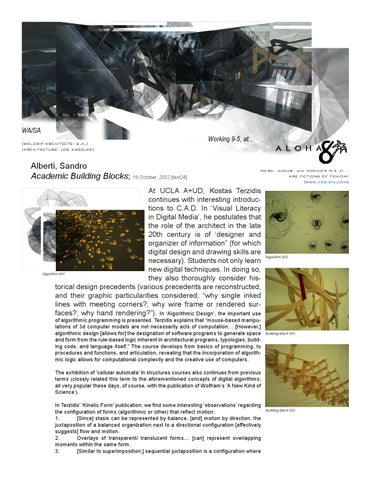 At UCLA A+UD, Kostas Terzidis continues with interesting introductions to C.A.D. In ‘Visual Literacy in Digital Media’, he postulates that the role of the architect in the late 20th century is of ‘designer and organizer of information” (for which digital design and drawing skills are necessary). Students not only learn new digital techniques. In doing so, Algorithm 001. they also thoroughly consider historical design precedents (various precedents are reconstructed, and their graphic particularities considered; “why single inked lines with meeting corners?; why wire frame or rendered surfaces?; why hand rendering?”). In ‘Algorithmic Design’, the important use

of algorithmic programming is presented. Terzidis explains that “mouse-based manipulations of 3d computer models are not necessarily acts of computation… [However,] algorithmic design [allows for] the designation of software programs to generate space and form from the rule-based logic inherent in architectural programs, typologies, building code, and language itself.” The course develops from basics of programming, to procedures and functions, and articulation, revealing that the incorporation of algorithmic logic allows for computational complexity and the creative use of computers.

The exhibition of ‘cellular automata’ in structures courses also continues from previous terms (closely related this term to the aforementioned concepts of digital algorithms; all very popular these days, of course, with the publication of Wolfram’s ‘A New Kind of Science’). In Terzidis’ ‘Kinetic Form’ publication, we find some interesting ‘observations’ regarding the configuration of forms (algorithmic or other) that reflect motion: 1. [Since] stasis can be represented by balance, [and] motion by direction, the juxtaposition of a balanced organization next to a directional configuration [effectively suggests] flow and motion. 2. Overlays of transparent/ translucent forms… [can] represent overlapping moments within the same form. 3. [Similar to superimposition,] sequential juxtaposition is a configuration where

a series of changes to a form are laid out in a sequential fashion [, revealing change in form and position, as opposed to mere change in form.] 4. Friction (the resistance of matter to sudden change) [can be] perceived as motion when associated with matter and force. 5. Absence is the state of being away. Subtraction is the act of taking something away. They both imply change, since something [seems to have been] detached or disappeared. 6. Aftereffect is an effect following its cause after some delay. [It can be employed to present the complex result(s) of a prolonged interaction.] 7. The visual impression of motion does not necessarily follow from the laws of physics. ‘Before’ and ‘after’ can be mixed, reversed, or implied in ways that contradict or negate physical laws, and yet be fully understood by the viewer as motion… 8. Tacit information and its suggestive value can be instrumental in implying movement without the actual moving element. Through metaphor or analogy certain facts can be inferred without actually presenting the ‘whole story’…

Also alluring at UCLA this quarter: Kulder’s ‘No Vacancy; Models of Spatial Occupancy’ (generation of form based on spatial occupancy), and Helene Furján’s ‘Spectacular Space’ (space for the presentation of hypermedia flows). Several courses this quarter are focusing on exhibition spaces. First there was a short seminar that resulted in the exhibit entitled ‘Exhibiting the Exhibit’, as a precursor ‘opening party’ for the school term. Now, in the course program, I find ‘Navigating the Exhibition’ (David Erdman and Ulrika Karlsson; from the Servo team), which will map exhibit spaces, rethinking them in terms of engrained flows that require one to adapt, learn, navigate, and develop techniques for response. Greg Lynn’s ‘Wholism and Intricacy’ will employ topology, calculus, and recent machinic architectural-design techniques, taking into account an upcoming exhibit at the Institute of Contemporary Art (January 17th, where the focus will be ‘intricacy’ as joining of disparity, involving scale and fineness). Thom Mayne proceeds this quarter with part 3 of the LA Now series, which made a recent splash as a very-visual exhibit at the A+D Museum. In the course description, we are treated to the important set of LA-Now parameters for urban evaluation: Natural habitat= topography + river + weather. Manmade habitat= building masses + existing land use + future land use. Resources= electrical grid + sewer/ water mains + telephone/ cellular grid + waste/ trash/ recycling. Transportation= airport + MTA subway + freeways + bus routes + major artery streets. People= demographics. Money= Industries + commercial activities.