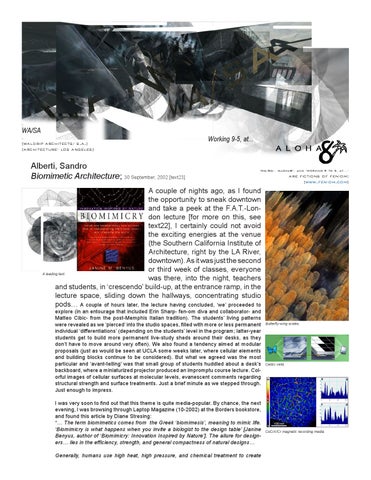 A couple of nights ago, as I found the opportunity to sneak downtown and take a peek at the F.A.T.-London lecture [for more on this, see text22], I certainly could not avoid the exciting energies at the venue (the Southern California Institute of Architecture, right by the LA River, downtown). As it was just the second or third week of classes, everyone A leading text. was there, into the night, teachers and students, in ‘crescendo’ build-up, at the entrance ramp, in the lecture space, sliding down the hallways, concentrating studio pods… A couple of hours later, the lecture having concluded, ‘we’ proceeded to explore (in an entourage that included Erin Sharp- fen-om diva and collaborator- and Matteo Cibic- from the post-Memphis Italian tradition). The students’ living patterns were revealed as we ‘pierced’ into the studio spaces, filled with more or less permanent individual ‘differentiations’ (depending on the students’ level in the program; latter-year students get to build more permanent live-study sheds around their desks, as they don’t have to move around very often). We also found a tendency aimed at modular proposals (just as would be seen at UCLA some weeks later, where cellular elements and building blocks continue to be considered). But what we agreed was the most particular and ‘avant-telling’ was that small group of students huddled about a desk’s backboard, where a miniaturized projector produced an impromptu course lecture. Colorful images of cellular surfaces at molecular levels, evanescent comments regarding structural strength and surface treatments. Just a brief minute as we stepped through. Just enough to impress. I was very soon to find out that this theme is quite media-popular. By chance, the next evening, I was browsing through Laptop Magazine (10-2002) at the Borders bookstore, and found this article by Diane Stresing: “… The term biomimetics comes from the Greek ‘biomimesis’, meaning to mimic life. ‘Biomimicry is what happens when you invite a biologist to the design table’ [Janine Benyus, author of ‘Biomimicry: Innovation Inspired by Nature’]. The allure for designers… lies in the efficiency, strength, and general compactness of natural designs… Generally, humans use high heat, high pressure, and chemical treatment to create

artificial materials. Ironically, because of this very trait, we consider ourselves to be the most highly evolved of all creatures. But nature’s ‘lowly’ creatures often have a better way of doing things, and they typically ‘manufacture’ in or near their own bodies… [Birds, for example,] all appear to be painted beauties,… [but many] are actually completely brown in color. They appear brightly colored thanks to light that refracts through layers of keratin… The animals make many thin layers of the stuff, and as light travels through those layers, it refracts in various wavelengths…

[The process can be used to] get permanent, never-fade color that’s chip resistant, too… Similarly, the body of your next car can be treated with a substance inspired by the toughening properties of antler bone. A wide variety of biomimetic projects are in development, in testing, or in use now. One company, Iridigm [www.iridigm.com], uses naturally-inspired technology to create laptop displays that you can read in sunlight…

Hearing aids [are being] modeled after a fly:… the Ormia… Unlike the common housefly, Ormia has real ears, and the mechanical design of those ears is superior to human ears in several ways… [At the] State University of New York at Binghamton [www.me.binghamton.edu],… the same line of research is being used to develop vibration dampers for magnetic data storage systems… Meanwhile, at the Beckman Institute, University of Illinois [www.beckman.uicu.com],… researchers are creating autonomic materials systems. Systems that mimic the body’s processes, from regulating temperature to healing broken parts, can be built into new materials…

To create the self-healing composite,… a catalyst is ground into a fine powder and mixed into an epoxy resin. A liquid healing agent is then encapsulated in a polymeric shell and mixed into the resin. When cracks occur, the capsules also crack, ‘spilling’ the chemically-active liquid, which is drawn to the cracks. When the catalyst comes into contact with the liquid, it triggers a reaction and bonds the cracks closed… MuscleSheet, created by Biomimetic Products [www.biomimetic.com], is a soft, electroactive composite material that can be mechanically bent by applying low-voltage charges. How much it bends depends on the frequency of the applied voltage and the thickness of the sheet. Because it is ionic, MuscleSheet needs to be wet to work. Not coincidentally, it is being used in propulsion fins for surface and underwater vehicles… Light-sensing brittlestars are getting [a lot of]… attention, because they make a surprisingly efficient calcite crystal that acts as both armor and as an optical micro-lens… Their skeleton… acts as a giant compound eye,… composed of thousands of perfect microlenses… Several military research projects focus on biomimetic sonar… for navigation systems, on marine propulsion techniques, natural cooling systems, anti-fouling coatings, and adhesive properties in

natural organisms (like slugs). Meanwhile, the beauty of natural systems has impressed designers at commercial sporting-goods manufacturers. Nike [www.niketown.com] advertises new soccer shoes made of a material like kangaroo skin, only better… Rawlings’ [www.rawlings.com] Vise softball glove is designed to keep a catcher’s fingers close together, as they are in a natural, barehanded catch. The result is a stronger grab and reduced risk of injury. The there’s Ornitech [members.tripod.com/ornitech],… selling makeyour-own kits for kites that flap their wings just like dragonflies and swallows… AeroVironment [www.aerovironment.com] has worked closely with NASA and other government agencies to develop viable unmanned air vehicles. One model, the Pathfinder Plus, is solar powered and has a wingspan of more than 100 feet… Birds, in fact, have a whole flock of researchers following them. Not just to mimic flapping flight, but also to understand and use some of their navigational and language-learning abilities… What in nature could make your laptop lighter and your palm more powerful? Photosynthesis, in a battery cell… And when the digital world isn’t fast enough, perhaps we should consider natural computing… A cell is just like a computer. As molecules jigsaw together in cells, they set off a cascade of reactions that pass along a message…”