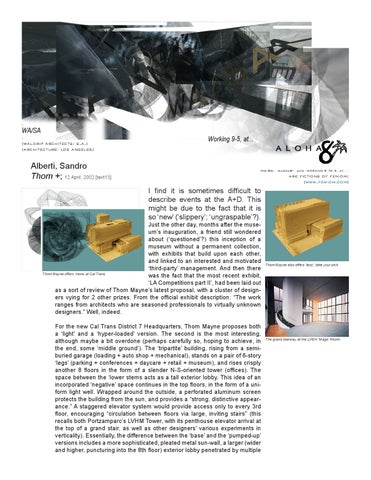 I find it is sometimes difficult to describe events at the A+D. This might be due to the fact that it is so ‘new’ (‘slippery’; ‘ungraspable’?).

Just the other day, months after the museum’s inauguration, a friend still wondered about (‘questioned’?) this inception of a museum without a permanent collection, with exhibits that build upon each other, and linked to an interested and motivated ‘third-party’ management. And then there Thom Mayne offers ‘more’ at Cal Trans. was the fact that the most recent exhibit, ‘LA Competitions part II’, had been laid out as a sort of review of Thom Mayne’s latest proposal, with a cluster of designers vying for 2 other prizes. From the official exhibit description: “The work ranges from architects who are seasoned professionals to virtually unknown designers.” Well, indeed. For the new Cal Trans District 7 Headquarters, Thom Mayne proposes both a ‘light’ and a ‘hyper-loaded’ version. The second is the most interesting, although maybe a bit overdone (perhaps carefully so, hoping to achieve, in the end, some ‘middle ground’). The ‘tripartite’ building, rising from a semiburied garage (loading + auto shop + mechanical), stands on a pair of 6-story ‘legs’ (parking + conferences + daycare + retail + museum), and rises crisply another 8 floors in the form of a slender N-S-oriented tower (offices). The space between the ‘lower stems acts as a tall exterior lobby. This idea of an incorporated ‘negative’ space continues in the top floors, in the form of a uniform light well. Wrapped around the outside, a perforated aluminum screen protects the building from the sun, and provides a “strong, distinctive appearance.” A staggered elevator system would provide access only to every 3rd floor, encouraging “circulation between floors via large, inviting stairs” (this recalls both Portzamparc’s LVHM Tower, with its penthouse elevator arrival at the top of a grand stair, as well as other designers’ various experiments in verticality). Essentially, the difference between the ‘base’ and the ‘pumped-up’ versions includes a more sophisticated, pleated metal sun-wall, a larger (wider and higher, puncturing into the 8th floor) exterior lobby penetrated by multiple

The grand stairway at the LVMH ‘Magic Room’.

aerial bridges and catwalks, a more irregular/ shifting light well above, an enormous chilledwater storage tank on the roof, photovoltaic panels on the roof and walls, a raised-floor system for wiring, improved-tinting/ low-e-coated glazing, operable windows with automatic AC shut off. Public art (as expected from architecture with such a profile) would be incorporated, in the form of an enormous mural depicting the history of Cal Trans and California, and with a nouveau sculptural work of Keith Sonnier (probably on the exterior sun-screen envelope). The other projects include the new LA Federal Courthouse and the Palos Verdes Art Center. The first is represented quite starkly by Ralph Johnson/ Perkins + Will, Craig Hartman/ Skidmore Owings + Merrill, Rafael Viñoly, and Mehrdad Yazdani/ Cannon Dworsky. The 3rd team does provide a slightly novel take: 6 limestone-clad ‘columns’, each containing courthouse services, and all covered by a glass curtain-envelope. In model and drawings, however, the dense mullion-work of the exterior glazing does not permit an appreciation of the softly bulging volumes rising within, so, in the end, the effect is that of a glazed metal box with several chimneys emerging from the roof. At any rate, this was a much better proposal, I think, than those of Perkins + Will (also separating columns, but based on harsher orthogonality, and dependent on a ‘pastiched’ tensile-woven solar-wall structure at one facade), or that of SOM (an 11-story slender limestone form with a glazed atrium in front; confidence, stability, dignity; all, of course, orthogonal). Rafael Viñoly comes clean but short, with a curve-within-a-cube that allows for a uniform distribution of spaces that look inward and out to expansive views of the Civic Center and mountains beyond (when it isn’t too smoggy in town).

Participants of the Palos Verdes Art Center seemed younger and quirkier overall. One of the most restrained proposals is that submitted by Johnston Marklee and Associates, a series of low buildings hugging the topography (which is reflected, above, by a translucent floating roof-scape that brings everything together and modulates sunlight). Andrea Ponsi proposes something similar (again, low-height structures separated by courtyards, but this time connected softly by an overall system of wood trellises). Students at the University of Hawaii/ Mano propose a ‘Greg Lynn’ blob-take. The buildings here are distorted wormlike shapes that bifurcate and recombine throughout (these free-flow forms and intersections provide a “plethora of uniquely-shaped studios, galleries, bridges, corridors;” and the ground is also excavated, providing more vertical rhythm). Finally, Richard Tabesse shows some of the super-postmodern architecture that has begun to become ever more prevalent in academic circles (kitschy and colorful, symbolic, shapes, recombined in ‘wrong’ contexts, sizes, positions, etc.). The more regular architecture of part of the project follows the take of the first 2 projects (albeit painted glossy white), but half of the program is housed in an oversized Streamline trailer that simply cannot escape notice (the effect is cute, already seen, in a way, at the lobby of Felderman-Keatinge’s MTV Networks, 1998; however, it fails

to take into account programmatic changes that any of the typical trailer elements might undergo once resized so exaggeratedly; the program seems to be merely fitted into an empty shell with funky skylights).

Cal Trans District 7 Headquarters, on view at the A+D Museum (+ the LA Federal Courthouse and the Palos Verdes Art Center).

Cal Trans District 7 Headquarters, on view at the A+D Museum (+ the LA Federal Courthouse and the Palos Verdes Art Center).