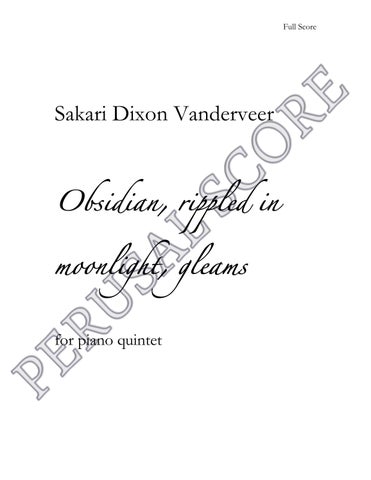 When I begin to write a piece, I usually refrain from attaching a specific title or image to it until much of the work is complete and there is an image or scene that comes to me freely but won’t disappear. While writing the initial sketches of Obsidian, rippled in moonlight, gleams, I originally thought of moonlight being reflected on a body of water. As I continued writing, the image of obsidian soon became a metaphor for the water. I eventually began to cling to that visual as the overarching theme. In spite of its darkness and opacity, obsidian is a stone that readily reflects light. Though it is a byproduct of a volcanic eruption -- a devastating and catastrophic event – this stone represents the beauty that can be found even in the most trying of times. This piece was premiered by the Salastina Music Society in Pasadena, CA on April 6, 2019. —Sakari Dixon Vanderveer Instrumentation: 2 Violins Viola Violoncello Piano Duration: 9 minutes, 40 seconds

Visit www.SakariDixon.com to contact the composer, read the latest news, or notify her of an upcoming or past performance.

Performance Notes: Accidentals As is customary, all accidentals are valid for the full duration of the measure in which they are provided. Harmonics Diamond noteheads represent where fingers are placed. Standard noteheads with a circle above them represent the desired pitch. At letter “G,” Violin II and Viola perform trills from either a stopped note or an open string to either a natural or an artificial harmonic. These trills begin on the principal note. A cue note in parenthesis is used to specify the harmonic to be used for the trilling note. Glissandi All glissandi begin immediately on the note preceding the glissandi marking. Whenever a pitch is to be sustained before a glissando begins, a tie is used to clarify this as shown in the example below from Violin I, measure 3:

Between rehearsal letters “B” and “C”, Violins I and II are asked to perform harmonic glissandi. In measure 47, notes without noteheads are shown to give an approximate starting rhythm for this technique as shown below. However, it is not necessary for Violins I and II to line up. A high “B” is shown merely as the suggested upper limit of the pitches to be heard.

In measures 76 and 77, Violin I, Violin II, and Viola are given the instruction “stagger gliss.” Here, performers are discouraged from the temptation to match their pitch with one another until their glissandi arrive in unison at the last beat of measure 81. Cue notes are given in parenthesis to help performers pace the

glissandi so that they avoid matching pitch with one another. However, these pitches are approximate and are only meant to serve as a guide. Trills All trills begin on the principal note. Accidentals are used in trill markings to specify the trilling note. If a cue note in parenthesis follows the principal note, that note will specify the trilling note instead of an accidental. (See the section under “Harmonics” above.) 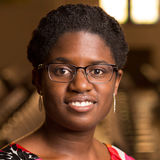