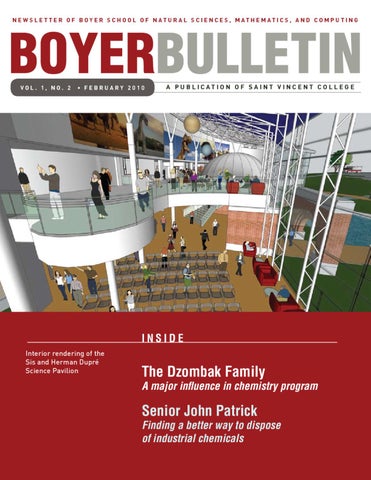 INSIDE Interior rendering of the Sis and Herman Dupré Science Pavilion

A major influence in chemistry program

Finding a better way to dispose of industrial chemicals

ome of you probably heard me say how much I valued reading Thomas Kuhn’s The Structure of Scientific Revolutions. Kuhn’s work had just been published when Dr. William Dzombak, the subject of this issue’s feature article, invited us (I was a sophomore or junior) to read what has turned out to be one of the best books in 20th century philosophy of science. The Dzombak influence continues with his son, David, a member of our Advisory Council and CMU professor, whose counsel I’ve relied on for facilities planning, environmental science and engineering programs, and even fundraising advice. Our current chemistry department faculty have a variety of interests—our Chair is a Carnegie Scholar and current Senior Fellow at the National Science Foundation funded National Center for Science and Civic Engagement, a national resource for the improvement of undergraduate science education. In recent years our chemistry professors received two NSF Course, Curriculum, and Laboratory Improvement grants which enabled us to acquire gas chromatograph and nuclear magnetic spectrometer instrumentation and to modify the curriculum with the use of these instruments. Another faculty member receives support from the Department of Environmental Protection for research related to our wetlands project; another is a participant in the POGIL (Process Oriented Guided Inquiry Learning) project; and our junior faculty member has a pending NSF Research in Undergraduate Institutions proposal. Our chemistry students are equally diverse in their plans and interests. In the past two years our graduates have entered graduate degree programs at Case Western, Notre Dame, Pitt and the University of Michigan; University of Maryland medical school; New York Chiropractic College; working at Johns Hopkins Applied Physics Lab, Carnegie Mellon University and PPG; or completing their secondary teaching certification. The chemists are especially eager to see the completion of the new core building since the upper level will include chemistry labs for organic, synthetic, advanced and biochemistry. The physical chemistry laboratory is scheduled for renovation in the current chemistry building. I was honored to be named the 17th president of Saint Vincent College on January 27 and look forward to continuing to serve you in that new role beginning July 1, with the new Science Center remaining the top priority of the College. I am happy to report that since the last Bulletin we’ve raised $2.43 million for our project, as you can see from the chart on the back cover. Thank you all.

ay the name Dzombak to Saint Vincent College alumni and you will immediately hear a mimic of the shrill, never-to-be-forgotten voice of Dr. William Dzombak. Dr. Dzombak, a beloved chemistry professor with a unique teaching style who retired in 1985 after more than three decades in the classroom at Saint Vincent College, recently visited campus. He reflected on his rewarding career and on the fundraising effort that one of his children, Dr. David Dzombak, C’79, is heading to honor his father’s contribution to the development of chemical education at Saint Vincent by having a classroom named in his honor in the new Sis and Herman Dupré Science Pavilion now under construction.

Alumni remember Dr. Dzombak as a very demanding teacher who brought out the best in his students by challenging them during every minute of every class – holding their attention with a barrage of questions to make sure they understood and the anticipation of “impromptu, unannounced” pop quizzes in the closing minutes of classes. “Some people say I was bad news for them, others think I was OK,” the self-effacing Dr. Dzombak commented. “The thing I value most was the contribution I may or may not have made to the upgrading of the quality of the chemistry department coursework, especially in physical chemistry. I will leave it to others to judge my contribution to their education.” When he learned of the plan to honor him, Dr. Dzombak modestly said that he didn’t think he had done more than so many other faculty. “But, I’m flattered,” he admitted. He speaks fondly of his decision in 1952 to leave an early career research position at Argonne National Laboratory to teach at Saint Vincent because there was an opportunity for him to make a difference. He was directed to Saint Vincent by the late Fr. Xavier Mihm, O.S.B., a young monk who had pursued graduate studies in chemistry with him at Purdue. “I wanted to teach in a small pond where I could make a contribution,” he said. “I also wanted a place that was just getting started. I was familiar with Saint Vincent because I used to visit campus at Easter to hear the monks sing their chants.” His birthplace was in nearby McKeesport. “When I got here I found a dismal, empty room

at Argonne, he lived near the University of Chicago in Alfred Hall with poor lighting and no equipment,” and spent evenings “hanging out” at the University. he recalled. “Later, the college enhanced the space It was there that he met several people who would and I designed lab benches which the carpenter shop influence his life – philosophers Mortimer Adler and executed beautifully. I think some of them are still in Jacques Maritaine, and his future wife, Agnes Reiter, use today in the science complex we moved to in 1969. I whom he married on November 28, 1953 in the Saint also set about building most of the apparatus that was Vincent Basilica. The couple is proud of the success needed. That occupied much of my time in the early of their five grown children—Deborah, David, Laura, years. Fr. Mark Kistner, O.S.B., was the main pioneer Ivan and Stefanie, all of whom graduated from Saint in developing the pre-1950 chemistry department at Vincent or Seton Hill—and 15 grandchildren. Saint Vincent and was well known for his public service David is the Walter J. Blenko, Sr. Professor of work in analyzing coal samples for area residents at a Environmental Engineering at Carnegie Mellon time when coal was the primary fuel used for heating University and an active member of the Advisory Board homes and running industry.” Besides Fr. Mark of the Herbert W. Boyer School of Natural Sciences, and Fr. Xavier, others who built the department’s Mathematics, and Computing at Saint Vincent. He is reputation were the late Dr. Daniel Nolan and Fr. currently heading a fundraising campaign to honor Bertin Emling. Later, Saint Vincent was similarly well his father by naming one of the classrooms. “During known in the region for the water testing laboratory my father’s tenure at Saint Vincent, he taught introservice it provided. But he most enjoyed teaching ductory chemistry courses chemistry—particularly for freshman students, physical chemistry, espephysical chemistry courses cially to those students who for upperclassmen, Great were infected with chemical Books seminars, and fever. others,” David commented. Since his retirement “His incisive scientific he became an active volmind, disciplined work, unteer with the Serra Club and dedicated teaching in and its environmental collaboration with his fellow programs, the U.S. Army faculty members helped the Corps of Engineers and College to develop strong its public outreach and programs and a reputation education programs, and for quality in the natural with the Pennsylvania Canal sciences. At the core of Society where he enjoyed Dr. William Dzombak and his wife, Agnes his teaching style was an researching the remains of emphasis on fundamentals a canal system that once of science, the practical application of scientific operated between Pittsburgh and Philadelphia and concepts, and the adherence to high professional editing its journal for a dozen years. He still reads, standards. He had high expectations for student work, researches and writes daily. helping to prepare graduates for advanced academic Dr. Dzombak, in generally good health except for studies and professional careers in chemistry and declining eyesight (he celebrated his 88th birthday on related scientific fields. What helped draw him to Saint December 4), earned a bachelor of science degree at Vincent and what he maintains to this day is a strong the University of Pittsburgh and a Ph.D. from Purdue. belief in the importance of a liberal arts education as Initially he worked at Providence College in Rhode preparation for life and lifelong learning. He was a Island and then at the Argonne National Laboratory great teacher, a versatile scientist and scholar, and in Chicago where they were developing the world’s for my siblings and me, also a devoted father.” first nuclear powered submarine for the Navy. While

aint Vincent College senior chemistry major John Patrick is searching for a better way to dispose of industrial chemicals to protect the environment. As the focus of his senior research project, The Degradation of Textile Dyes in Wastewater Using Titanium Dioxide Nanotubes, he hopes to learn more about how to neutralize chemicals that may be dumped into wastewater from industrial facilities. “My research consists of utilizing plates of titanium and running an electrical current through them so that little holes form first, and then small tubes of the titanium dioxide form that can be used to destroy the dyes,” Mr. Patrick explained. “Whenever you shine ultraviolet light into the solution, you actually degrade the dye so that it is no longer harmful to the environment. They form compounds that are harmless to the wildlife and the ecosystem.” The process, known as photocatalysis, can be demonstrated by Mr. Patrick in the physical chemistry laboratory at Saint Vincent College’s Science Center under the direction of faculty research advisor Dr. Steven Gravelle. “The method that I have set up is cheaper than the methods industrial companies typically use,” he said. “Currently, most put titanium dioxide powder in the dye solution and expose it to ultraviolet light to degrade the dyes but that creates a lot of waste. Using plates would be more economical since there is nothing to filter out of the water. This is obviously cheaper and less complicated if it is possible to get it to work in mass quantities.” As his science education reaches its completion, Mr. Patrick says that he has enjoyed the small college atmosphere of Saint Vincent. “The faculty are really personable and easy to talk to; they are more like mentors and friends. It’s been a personal experience.” He credits Dr. Gravelle and his faculty advisor Dr. Jason Vohs with his success. He says future students will enjoy the new facilities of the Sis and Herman Dupré Science Pavilion when the first phase is completed next fall. “It will mean a more technologically advanced building in which students will feel more comfortable and more eager to learn,” he observed. A 2006 graduate of Hempfield Area High School, he is the son of John and Paula Patrick of Manor. A member of West Hempfield Presbyterian Church, he has been a volunteer at the homeless shelter in Latrobe. The recipient of a Herbert W. Boyer Scholarship, he has also received a Palumbo Student Saint Vincent College senior Research Grant that will enable him to present the findings of his research at chemistry major John Patrick (right) the American Chemistry Society Conference in San Francisco in the spring. performs research under the direction After graduation in May, he plans to pursue graduate studies toward a doctorate of Dr. Steven Gravelle in the College’s in nanotechnology or materials chemistry at the University of Texas or Rice physical chemistry laboratory. University.

SCIENCE CENTER UPDATE Saint Vincent College alumni and friends continue to invest in our future through their generous support for this project! As construction progresses on the first phase of the Sis and Herman DuprĂŠ Science Pavilion, we watch with excitement the steel frame rise. At the same time, we are grateful as the total gifts and grants for this wonderful project continue to grow as well! 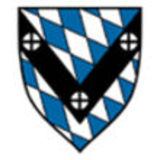 Newsletter of the Boyer School of Natural Sciences, Mathematics, and Computing

Newsletter of the Boyer School of Natural Sciences, Mathematics, and Computing