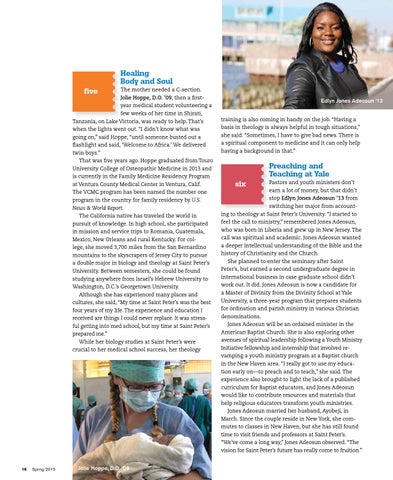 year medical student volunteering a few weeks of her time in Shirati, Tanzania, on Lake Victoria, was ready to help. That’s when the lights went out. “I didn’t know what was going on,” said Hoppe, “until someone busted out a flashlight and said, ‘Welcome to Africa.’ We delivered twin boys.”

training is also coming in handy on the job. “Having a basis in theology is always helpful in tough situations,” she said. “Sometimes, I have to give bad news. There is a spiritual component to medicine and it can only help having a background in that.”

That was five years ago. Hoppe graduated from Touro

Preaching and Teaching at Yale

University College of Osteopathic Medicine in 2013 and is currently in the Family Medicine Residency Program at Ventura County Medical Center in Ventura, Calif.

The VCMC program has been named the number one

The California native has traveled the world in pursuit of knowledge. In high school, she participated in mission and service trips to Romania, Guatemala, Mexico, New Orleans and rural Kentucky. For college, she moved 3,700 miles from the San Bernardino mountains to the skyscrapers of Jersey City to pursue a double major in biology and theology at Saint Peter’s University. Between semesters, she could be found studying anywhere from Israel’s Hebrew University to Washington, D.C.’s Georgetown University. Although she has experienced many places and cultures, she said, “My time at Saint Peter’s was the best four years of my life. The experience and education I received are things I could never replace. It was stressful getting into med school, but my time at Saint Peter’s prepared me.” While her biology studies at Saint Peter’s were crucial to her medical school success, her theology

earn a lot of money, but that didn’t stop Edlyn Jones Adeosun ’13 from

program in the country for family residency by U.S. News & World Report.

switching her major from accounting to theology at Saint Peter’s University. “I started to feel the call to ministry,” remembered Jones Adeosun, who was born in Liberia and grew up in New Jersey. The call was spiritual and academic. Jones Adeosun wanted a deeper intellectual understanding of the Bible and the history of Christianity and the Church. She planned to enter the seminary after Saint Peter’s, but earned a second undergraduate degree in international business in case graduate school didn’t work out. It did. Jones Adeosun is now a candidate for a Master of Divinity from the Divinity School at Yale University, a three-year program that prepares students for ordination and parish ministry in various Christian denominations. Jones Adeosun will be an ordained minister in the American Baptist Church. She is also exploring other avenues of spiritual leadership following a Youth Ministry Initiative fellowship and internship that involved revamping a youth ministry program at a Baptist church in the New Haven area. “I really got to use my education early on—to preach and to teach,” she said. The experience also brought to light the lack of a published curriculum for Baptist educators, and Jones Adeosun would like to contribute resources and materials that help religious educators transform youth ministries. Jones Adeosun married her husband, Ayobeji, in March. Since the couple reside in New York, she commutes to classes in New Haven, but she has still found time to visit friends and professors at Saint Peter’s. “We’ve come a long way,” Jones Adeosun observed. “The vision for Saint Peter’s future has really come to fruition.” 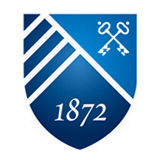