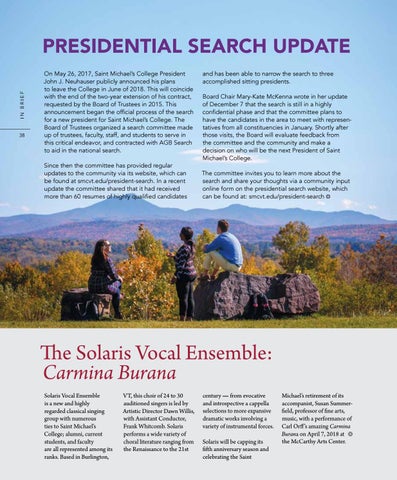 On May 26, 2017, Saint Michael’s College President John J. Neuhauser publicly announced his plans to leave the College in June of 2018. This will coincide with the end of the two-year extension of his contract, requested by the Board of Trustees in 2015. This announcement began the official process of the search for a new president for Saint Michael’s College. The Board of Trustees organized a search committee made up of trustees, faculty, staff, and students to serve in this critical endeavor, and contracted with AGB Search to aid in the national search. Since then the committee has provided regular updates to the community via its website, which can be found at smcvt.edu/president-search. In a recent update the committee shared that it had received more than 60 resumes of highly qualified candidates

and has been able to narrow the search to three accomplished sitting presidents. Board Chair Mary-Kate McKenna wrote in her update of December 7 that the search is still in a highly confidential phase and that the committee plans to have the candidates in the area to meet with representatives from all constituencies in January. Shortly after those visits, the Board will evaluate feedback from the committee and the community and make a decision on who will be the next President of Saint Michael’s College. The committee invites you to learn more about the search and share your thoughts via a community input online form on the presidential search website, which can be found at: smcvt.edu/president-search

VT, this choir of 24 to 30 auditioned singers is led by Artistic Director Dawn Willis, with Assistant Conductor, Frank Whitcomb. Solaris performs a wide variety of choral literature ranging from the Renaissance to the 21st

century — from evocative and introspective a cappella selections to more expansive dramatic works involving a variety of instrumental forces. Solaris will be capping its fifth anniversary season and celebrating the Saint

Michael’s retirement of its accompanist, Susan Summerfield, professor of fine arts, music, with a performance of Carl Orff ’s amazing Carmina Burana on April 7, 2018 at the McCarthy Arts Center. 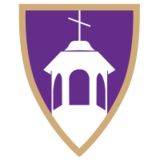