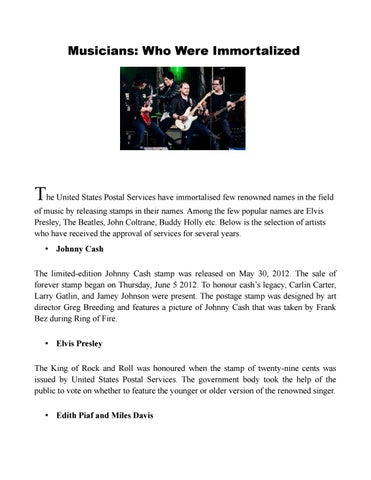 The United States Postal Services have immortalised few renowned names in the field of music by releasing stamps in their names. Among the few popular names are Elvis Presley, The Beatles, John Coltrane, Buddy Holly etc. Below is the selection of artists who have received the approval of services for several years. • Johnny Cash The limited-edition Johnny Cash stamp was released on May 30, 2012. The sale of forever stamp began on Thursday, June 5 2012. To honour cash’s legacy, Carlin Carter, Larry Gatlin, and Jamey Johnson were present. The postage stamp was designed by art director Greg Breeding and features a picture of Johnny Cash that was taken by Frank Bez during Ring of Fire. • Elvis Presley The King of Rock and Roll was honoured when the stamp of twenty-nine cents was issued by United States Postal Services. The government body took the help of the public to vote on whether to feature the younger or older version of the renowned singer. • Edith Piaf and Miles Davis

In June 2012, the US Postal Services in association with La Poste, the national mail carrier of France-honoured singer Edith Piaf and trumpeter Miles Davis. • Dinah Washington Dinah Washington, the famous American singer and pianist who was cited as ‘the most popular black female recording artists of the 50s’ was featured in Blues series and Legends of American Music in 1993.

• Buddy Holly Charles Hardin Holly, professionally known as Buddy Holly, was the central figure of Rock and Roll in mid-1950s. He was also featured in the same series of stamp of Legends of American Music issued in 1993. • Frank Sinatra Frank Albert Sinatra, the popular singer, actor and producer of the 20th  century was featured in United States Postal Services’ stamp issued in California, on December 12, 2007. • The Beatles The most popular stamp of the last decade in the world of music was the collection featuring the classic album of The Beatles. The Royal Mail honoured the famous band in 2007 by issuing band’s most iconic album cover including Revolver, Abbey Road, and Sergeant Pepper’s Lonely Hearts Club Band and Help. • John Lennon Marking the 15th anniversary of his death, the renowned artist Yuan Lee, captured numerous facets of the Beatle in the Commemorative Portrait Stamps of John Lennon.

• Lead Belly Huddie ‘Lead Belly’ was a vocalist, folk performer and a guitarist. He was also known as ‘the king of the Twelve-String Guitar’ and was placed into the Rock and Roll Hall of Fame in 1989. The postage stamp for him was issued on June 26th, 1998. • Jimi Hendrix The US Postal Service released the Jimi Hendrix Forever Stamp in March 2014. Recognized as the most influential guitarist of the 20 th century, Hendrix displayed the influences of rock, modern jazz, R&B etc. The work of these evergreen artists has already immortalized them. Hence, the music created by these legends is the soul of all the musical concerts across the world. The US Postal Services have just put a stamp on these immortal personalities. Thank you for reading this blog I hope you like the blog Original link: https://blog.starclinch.com/musicians-who-were-immortalized/