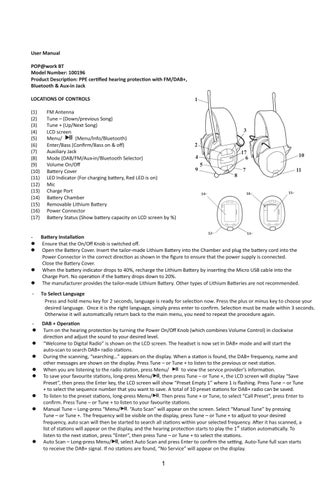 FM Antenna Tune – (Down/previous Song) Tune + (Up/Next Song) LCD screen (Menu/Info/Bluetooth) Menu/ Enter/Bass (Conﬁrm/Bass on & oﬀ) Auxiliary Jack Mode (DAB/FM/Aux-in/Bluetooth Selector) Volume On/Oﬀ Battery Cover LED Indicator (For charging battery, Red LED is on) Mic Charge Port Battery Chamber Removable Lithium Battery Power Connector Battery Status (Show battery capacity on LCD screen by %) Battery Installation Ensure that the On/Oﬀ Knob is switched oﬀ. Open the Battery Cover. Insert the tailor-made Lithium Battery into the Chamber and plug the battery cord into the Power Connector in the correct direction as shown in the ﬁgure to ensure that the power supply is connected. Close the Battery Cover. When the battery indicator drops to 40%, recharge the Lithium Battery by inserting the Micro USB cable into the Charge Port. No operation if the battery drops down to 20%. The manufacturer provides the tailor-made Lithium Battery. Other types of Lithium Batteries are not recommended.

To Select Language Press and hold menu key for 2 seconds, language is ready for selection now. Press the plus or minus key to choose your desired language. Once it is the right language, simply press enter to conﬁrm. Selection must be made within 3 seconds. Otherwise it will automatically return back to the main menu, you need to repeat the procedure again.

DAB + Operation Turn on the hearing protection by turning the Power On/Oﬀ Knob (which combines Volume Control) in clockwise direction and adjust the sound to your desired level. “Welcome to Digital Radio” is shown on the LCD screen. The headset is now set in DAB+ mode and will start the auto-scan to search DAB+ radio stations. During the scanning, “searching…” appears on the display. When a station is found, the DAB+ frequency, name and other messages are shown on the display. Press Tune – or Tune + to listen to the previous or next station. When you are listening to the radio station, press Menu/ to view the service provider’s information. To save your favourite stations, long-press Menu/ , then press Tune – or Tune +, the LCD screen will display “Save Preset”, then press the Enter key, the LCD screen will show “Preset Empty 1” where 1 is ﬂashing. Press Tune – or Tune + to select the sequence number that you want to save. A total of 10 preset stations for DAB+ radio can be saved. To listen to the preset stations, long-press Menu/ . Then press Tune + or Tune, to select “Call Preset”, press Enter to confirm. Press Tune – or Tune + to listen to your favourite stations. Manual Tune – Long-press “Menu/ . “Auto Scan” will appear on the screen. Select “Manual Tune” by pressing Tune – or Tune +. The frequency will be visible on the display, press Tune – or Tune + to adjust to your desired frequency, auto scan will then be started to search all stations within your selected frequency. After it has scanned, a st list of stations will appear on the display, and the hearing protection starts to play the 1 station automatically. To listen to the next station, press “Enter”, then press Tune – or Tune + to select the stations. Auto Scan – Long-press Menu/ , select Auto Scan and press Enter to conﬁrm the setting. Auto-Tune full scan starts to receive the DAB+ signal. If no stations are found, “No Service” will appear on the display.

Bluetooth Operation Turn on the Bluetooth function on your mobile phone or any other external Bluetooth devices. Search for POP@work BT on your Bluetooth device, and pair them. When paired, “Bluetooth Connected” is shown on the LCD screen. Press Menu/ , to play/pause the music or answer a call. Tap Tune + or Tune - to forward/rewind the songs. To reject the call, Long-press Tune – for 2 seconds. Re-dialing, long-press Tune + for 2 seconds, it will re-dial last call. When you receive a call through the Bluetooth function, it overrides the sound from FM/DAB+/Aux. Even pressing Mode activates nothing until the mobile call ends. After paired, the user still receives and answers a call while in Radio and Aux-in mode. FM Operation Press the “Mode” Button to switch to FM. Press “Enter” to confirm the setting. Long-press Tune – or Tune + to start scanning. Stop scanning when clear signal is received. Manual search by short pressing Tune – or Tune +. To review the station information, press Menu/ , if RDS message is available from the service provider. To save and listen to your favourite stations, refer to the steps of DAB+ preset stations as mentioned above. Short press Enter key, Audio mode selected to Mono / Auto, it is only for FM mode.

Bass Boost To enhance the bass performance, press Enter, “Bass” is shown on the display. To deactivate the Bass Boost function, press Enter again until “Bass” disappear from the screen.

Aux-in Jack Press the “Mode” button to select AUX. Press “Enter” to confirm the setting. To connect with other audio devices, plug a 3.5 mm Cable into the Aux-in Jack. Start playing the music from the audio device.

ADJUSTING THE FIT 1. Put on the earmuffs with the controls panel over your right ear. 2. With the headband over the crown of your head, position the muffs to completely enclose your ears. The muffs only provide hearing protection when worn with the headband over the crown of your head. 3. Slide the muffs carefully up or down to adjust for a firm, comfortable fit. 4. Ensure the cushions seal tightly against your head with no interference from foreign objects between the ear cup and your head (such as pencils or glasses temple arms). Spread the ear cups only enough to clear the ears. Do not return or reshape the headband. PLEASE NOTE For best performance, the earmuffs are fitted, adjusted and kept maintenance in accordance to manufacturer’s instruction. It is important to wear the earmuffs at all times in noisy surroundings to avoid the risk of hearing damage. Inspect the earmuffs regularly for serviceability. If the recommendations given above are not adhered, the protection by the earmuffs will be securely impaired. REMARKS The earmuffs provides audio signal sound pressure level limitation and limits the entertainment audio signal to 77,9 dB(A). Radio reception quality may be slightly distorted depending on surroundings. To prevent damage to the headset and radio function, do not subject it to rough handling. These earmuffs are provided with an entertainment audio facility and electrical audio input. The wearer should check correct operation before usage. If distortion or failure is detected, the wearer should refer to the manufacturer’s advice. The audibility of warning signals at specific workplaces may be impaired while using the entertainment facility.

NOTES Certain chemical substances may adversely affect this product. Further information should be sought from the manufacturer or authorized representatives; When hygiene covers are put on to the cushions, it may affect the acoustic performance of the earmuffs; Do not tear the cushion off from the headset, as the cushion is non-replaceable; Earmuffs, and in particular the cushions, may deteriorate with use and should be examined frequently for cracks and leakage; The product is protected by bubble wrap and then put into a printed gift box. After use, put it back into to the gift box for storage. GUARANTEE • If the product fails, please contact your supplier. • Remember that many outlets will require that you have a valid proof of purchase. • Any defect that arises due to faulty materials or workmanship will either be replaced, refunded or repaired free of charge where possible during this period by the dealer from whom you purchased the unit. • The guarantee does not cover accidental damage, misuse, cabinet parts, knobs or consumable items. • The guarantee will be rendered invalid if the product is re-sold or has been damaged by inexpert repair. • Specifications are subject to change without notice. NOTE: These warranty/guarantee rules apply only for products purchased in Norway, different rules apply in your country. Unit Marking:

Hereby, Sahaga declares that the ear muff with radio equipment POP@work BT is in compliance with Directive 2014/53 and Regulation (EU) 2016/425. To receive the full text of the EU Declaration of Conformity, send an email to salg@sahaga.com 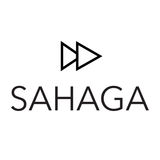