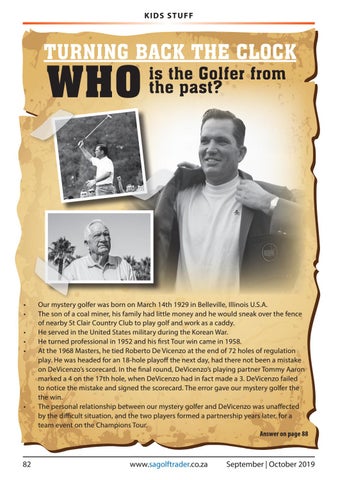 Turning back the clock

is the Golfer from the past?

Our mystery golfer was born on March 14th 1929 in Belleville, Illinois U.S.A. The son of a coal miner, his family had little money and he would sneak over the fence of nearby St Clair Country Club to play golf and work as a caddy. He served in the United States military during the Korean War. He turned professional in 1952 and his first Tour win came in 1958. At the 1968 Masters, he tied Roberto De Vicenzo at the end of 72 holes of regulation play. He was headed for an 18-hole playoff the next day, had there not been a mistake on DeVicenzo’s scorecard. In the final round, DeVicenzo’s playing partner Tommy Aaron marked a 4 on the 17th hole, when DeVicenzo had in fact made a 3. DeVicenzo failed to notice the mistake and signed the scorecard. The error gave our mystery golfer the the win. The personal relationship between our mystery golfer and DeVicenzo was unaffected by the difficult situation, and the two players formed a partnership years later, for a team event on the Champions Tour. Answer on page 88