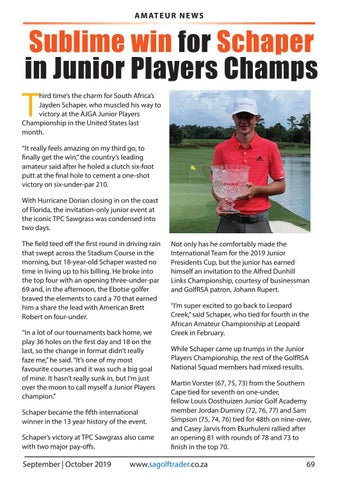 hird time’s the charm for South Africa’s Jayden Schaper, who muscled his way to victory at the AJGA Junior Players Championship in the United States last month. “It really feels amazing on my third go, to finally get the win,” the country’s leading amateur said after he holed a clutch six-foot putt at the final hole to cement a one-shot victory on six-under-par 210. With Hurricane Dorian closing in on the coast of Florida, the invitation-only junior event at the iconic TPC Sawgrass was condensed into two days. The field teed off the first round in driving rain that swept across the Stadium Course in the morning, but 18-year-old Schaper wasted no time in living up to his billing. He broke into the top four with an opening three-under-par 69 and, in the afternoon, the Ebotse golfer braved the elements to card a 70 that earned him a share the lead with American Brett Robert on four-under. “In a lot of our tournaments back home, we play 36 holes on the first day and 18 on the last, so the change in format didn’t really faze me,” he said. “It’s one of my most favourite courses and it was such a big goal of mine. It hasn’t really sunk in, but I’m just over the moon to call myself a Junior Players champion.” Schaper became the fifth international winner in the 13 year history of the event. Schaper’s victory at TPC Sawgrass also came with two major pay-offs.

Not only has he comfortably made the International Team for the 2019 Junior Presidents Cup, but the junior has earned himself an invitation to the Alfred Dunhill Links Championship, courtesy of businessman and GolfRSA patron, Johann Rupert. “I’m super excited to go back to Leopard Creek,” said Schaper, who tied for fourth in the African Amateur Championship at Leopard Creek in February. While Schaper came up trumps in the Junior Players Championship, the rest of the GolfRSA National Squad members had mixed results. Martin Vorster (67, 75, 73) from the Southern Cape tied for seventh on one-under, fellow Louis Oosthuizen Junior Golf Academy member Jordan Duminy (72, 76, 77) and Sam Simpson (75, 74, 76) tied for 48th on nine-over, and Casey Jarvis from Ekurhuleni rallied after an opening 81 with rounds of 78 and 73 to finish in the top 70.