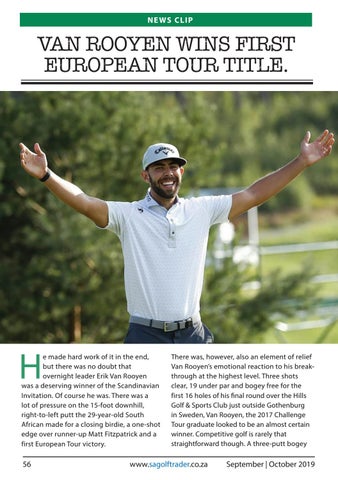 e made hard work of it in the end, but there was no doubt that overnight leader Erik Van Rooyen was a deserving winner of the Scandinavian Invitation. Of course he was. There was a lot of pressure on the 15-foot downhill, right-to-left putt the 29-year-old South African made for a closing birdie, a one-shot edge over runner-up Matt Fitzpatrick and a first European Tour victory.

There was, however, also an element of relief Van Rooyenâ&#x20AC;&#x2122;s emotional reaction to his breakthrough at the highest level. Three shots clear, 19 under par and bogey free for the first 16 holes of his final round over the Hills Golf & Sports Club just outside Gothenburg in Sweden, Van Rooyen, the 2017 Challenge Tour graduate looked to be an almost certain winner. Competitive golf is rarely that straightforward though. A three-putt bogey