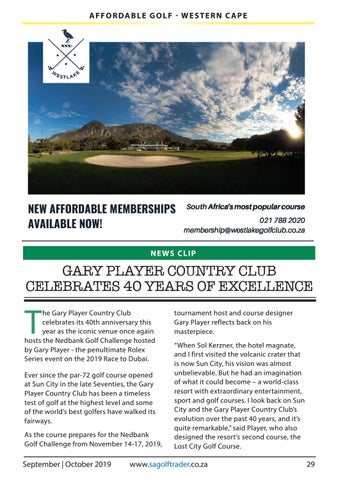 he Gary Player Country Club celebrates its 40th anniversary this year as the iconic venue once again hosts the Nedbank Golf Challenge hosted by Gary Player - the penultimate Rolex Series event on the 2019 Race to Dubai. Ever since the par-72 golf course opened at Sun City in the late Seventies, the Gary Player Country Club has been a timeless test of golf at the highest level and some of the world’s best golfers have walked its fairways. As the course prepares for the Nedbank Golf Challenge from November 14-17, 2019,

tournament host and course designer Gary Player reflects back on his masterpiece. “When Sol Kerzner, the hotel magnate, and I first visited the volcanic crater that is now Sun City, his vision was almost unbelievable. But he had an imagination of what it could become – a world-class resort with extraordinary entertainment, sport and golf courses. I look back on Sun City and the Gary Player Country Club’s evolution over the past 40 years, and it’s quite remarkable,” said Player, who also designed the resort’s second course, the Lost City Golf Course.