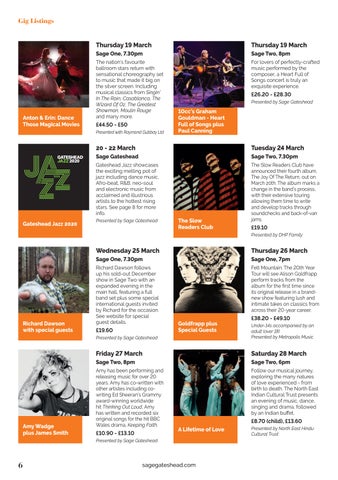 The nation’s favourite ballroom stars return with sensational choreography set to music that made it big on the silver screen. Including musical classics from Singin’ In The Rain, Casablanca, The Wizard Of Oz, The Greatest Showman, Moulin Rouge and many more.

For lovers of perfectly-crafted music performed by the composer, a Heart Full of Songs concert is truly an exquisite experience.

The Slow Readers Club have announced their fourth album, The Joy Of The Return, out on March 20th. The album marks a change in the band’s process, with their extensive touring allowing them time to write and develop tracks through soundchecks and back-of-van jams.

Richard Dawson follows up his sold-out December show in Sage Two with an expanded evening in the main hall, featuring a full band set plus some special international guests invited by Richard for the occasion. See website for special guest details.

Felt Mountain: The 20th Year Tour will see Alison Goldfrapp perform tracks from the album for the first time since its original release in a brandnew show featuring lush and intimate takes on classics from across their 20-year career.

Amy has been performing and releasing music for over 20 years. Amy has co-written with other artistes including cowriting Ed Sheeran’s Grammy award-winning worldwide hit Thinking Out Loud, Amy has written and recorded six original songs for the hit BBC Wales drama, Keeping Faith.

Follow our musical journey, exploring the many natures of love experienced - from birth to death. The North East Indian Cultural Trust presents an evening of music, dance, singing and drama, followed by an Indian buffet.