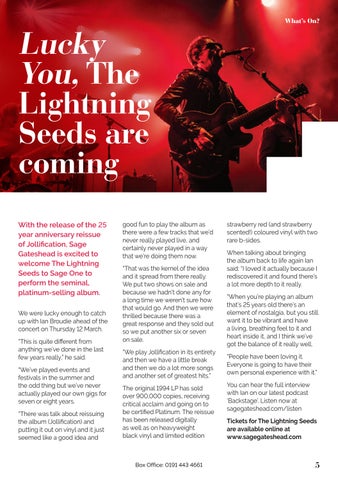 Lucky You, The Lightning Seeds are coming With the release of the 25 year anniversary reissue of Jollification, Sage Gateshead is excited to welcome The Lightning Seeds to Sage One to perform the seminal, platinum-selling album. We were lucky enough to catch up with Ian Broudie ahead of the concert on Thursday 12 March. “This is quite different from anything we’ve done in the last few years really,” he said. “We’ve played events and festivals in the summer and the odd thing but we’ve never actually played our own gigs for seven or eight years. “There was talk about reissuing the album (Jollification) and putting it out on vinyl and it just seemed like a good idea and

good fun to play the album as there were a few tracks that we’d never really played live, and certainly never played in a way that we’re doing them now. “That was the kernel of the idea and it spread from there really. We put two shows on sale and because we hadn’t done any for a long time we weren’t sure how that would go. And then we were thrilled because there was a great response and they sold out so we put another six or seven on sale. “We play Jollification in its entirety and then we have a little break and then we do a lot more songs and another set of greatest hits.” The original 1994 LP has sold over 900,000 copies, receiving critical acclaim and going on to be certified Platinum. The reissue has been released digitally as well as on heavyweight black vinyl and limited edition

strawberry red (and strawberry scented!) coloured vinyl with two rare b-sides. When talking about bringing the album back to life again Ian said: “I loved it actually because I rediscovered it and found there’s a lot more depth to it really. “When you’re playing an album that’s 25 years old there’s an element of nostalgia, but you still want it to be vibrant and have a living, breathing feel to it and heart inside it, and I think we’ve got the balance of it really well. “People have been loving it. Everyone is going to have their own personal experience with it.” You can hear the full interview with Ian on our latest podcast ‘Backstage’. Listen now at sagegateshead.com/listen Tickets for The Lightning Seeds are available online at www.sagegateshead.com