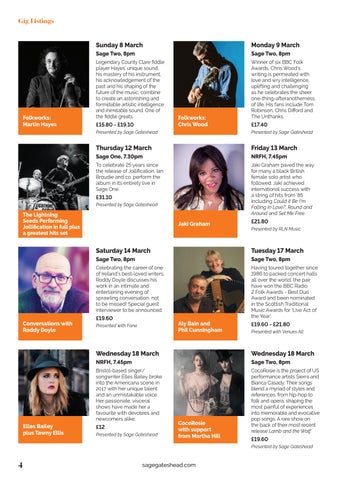 Legendary County Clare fiddle player Hayes’ unique sound, his mastery of his instrument, his acknowledgement of the past and his shaping of the future of the music, combine to create an astonishing and formidable artistic intelligence and inimitable sound. One of the fiddle greats.

Winner of six BBC Folk Awards, Chris Wood’s writing is permeated with love and wry intelligence, uplifting and challenging as he celebrates the sheer one-thing-afteranotherness of life. His fans include Tom Robinson, Chris Difford and The Unthanks.

To celebrate 25 years since the release of Jollification, Ian Broudie and co. perform the album in its entirety live in Sage One.

Jaki Graham paved the way for many a black British female solo artist who followed. Jaki achieved international success with a string of hits from ’85 including Could it Be I’m Falling In Love?, Round and Around and Set Me Free.

Celebrating the career of one of Ireland’s best-loved writers, Roddy Doyle discusses his work in an intimate and entertaining evening of sprawling conversation, not to be missed! Special guest interviewer to be announced.

Having toured together since 1986 to packed concert halls all over the world, the pair have won the BBC Radio 2 Folk Awards - Best Duo Award and been nominated in the Scottish Traditional Music Awards for ‘Live Act of the Year’.

Bristol-based singer/ songwriter Elles Bailey broke into the Americana scene in 2017 with her unique talent and an unmistakable voice. Her passionate, visceral shows have made her a favourite with devotees and newcomers alike.

CocoRosie is the project of US performance artists Sierra and Bianca Casady. Their songs blend a myriad of styles and references, from hip-hop to folk and opera, shaping the most painful of experiences into memorable and evocative pop songs. A rare show on the back of their most recent release Lamb and the Wolf.

CocoRosie with support from Martha Hill