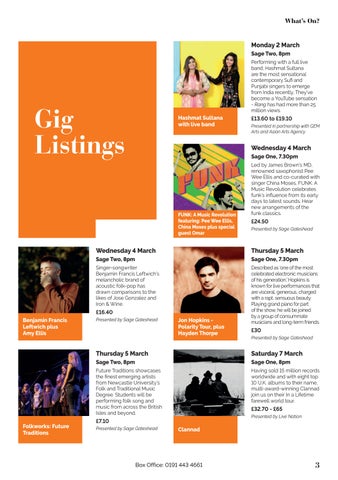 Monday 2 March Sage Two, 8pm Performing with a full live band, Hashmat Sultana are the most sensational contemporary Sufi and Punjabi singers to emerge from India recently, They’ve become a YouTube sensation - Rang has had more than 25 million views.

Described as ‘one of the most celebrated electronic musicians of his generation,’ Hopkins is known for live performances that are visceral, generous, charged with a rapt, sensuous beauty. Playing grand piano for part of the show, he will be joined by a group of consummate musicians and long-term friends.

Presented in partnership with GEM Arts and Asian Arts Agency

Future Traditions showcases the finest emerging artists from Newcastle University’s Folk and Traditional Music Degree. Students will be performing folk song and music from across the British Isles and beyond.

Having sold 15 million records worldwide and with eight top 10 U.K. albums to their name, multi-award-winning Clannad join us on their In a Lifetime farewell world tour.