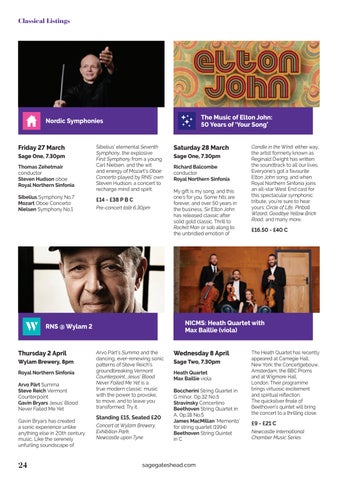 The Music of Elton John: 50 Years of ‘Your Song’

Sibelius’ elemental Seventh Symphony, the explosive First Symphony from a young Carl Nielsen, and the wit and energy of Mozart’s Oboe Concerto played by RNS’ own Steven Hudson; a concert to recharge mind and spirit.

Sage One, 7.30pm Richard Balcombe conductor Royal Northern Sinfonia My gift is my song, and this one’s for you. Some hits are forever, and over 50 years in the business, Sir Elton John has released classic after solid gold classic. Thrill to Rocket Man or sob along to the unbridled emotion of

Candle in the Wind: either way, the artist formerly known as Reginald Dwight has written the soundtrack to all our lives. Everyone’s got a favourite Elton John song, and when Royal Northern Sinfonia joins an all-star West End cast for this spectacular symphonic tribute, you’re sure to hear yours: Circle of Life, Pinball Wizard, Goodbye Yellow Brick Road, and many more.

Arvo Pärt’s Summa and the dancing, ever-renewing sonic patterns of Steve Reich’s groundbreaking Vermont Counterpoint, Jesus’ Blood Never Failed Me Yet is a true modern classic: music with the power to provoke, to move, and to leave you transformed. Try it.

The Heath Quartet has recently appeared at Carnegie Hall, New York; the Concertgebouw, Amsterdam; the BBC Proms and at Wigmore Hall, London. Their programme brings virtuosic excitement and spiritual reflection. The quicksilver finale of Beethoven’s quintet will bring the concert to a thrilling close.