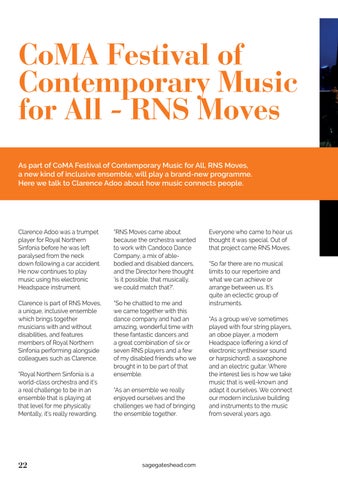 Clarence Adoo was a trumpet player for Royal Northern Sinfonia before he was left paralysed from the neck down following a car accident. He now continues to play music using his electronic Headspace instrument.

“RNS Moves came about because the orchestra wanted to work with Candoco Dance Company, a mix of ablebodied and disabled dancers, and the Director here thought ‘is it possible, that musically, we could match that?’.

Clarence is part of RNS Moves, a unique, inclusive ensemble which brings together musicians with and without disabilities, and features members of Royal Northern Sinfonia performing alongside colleagues such as Clarence.

“So he chatted to me and we came together with this dance company and had an amazing, wonderful time with these fantastic dancers and a great combination of six or seven RNS players and a few of my disabled friends who we brought in to be part of that ensemble.

“Royal Northern Sinfonia is a world-class orchestra and it’s a real challenge to be in an ensemble that is playing at that level for me physically. Mentally, it’s really rewarding.

“As an ensemble we really enjoyed ourselves and the challenges we had of bringing the ensemble together.

Everyone who came to hear us thought it was special. Out of that project came RNS Moves. “So far there are no musical limits to our repertoire and what we can achieve or arrange between us. It’s quite an eclectic group of instruments. “As a group we’ve sometimes played with four string players, an oboe player, a modern Headspace (offering a kind of electronic synthesiser sound or harpsichord), a saxophone and an electric guitar. Where the interest lies is how we take music that is well-known and adapt it ourselves. We connect our modern inclusive building and instruments to the music from several years ago.