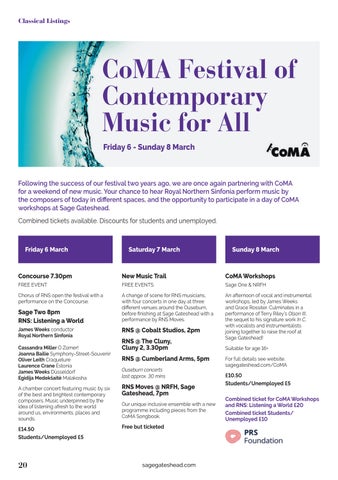 Following the success of our festival two years ago, we are once again partnering with CoMA for a weekend of new music. Your chance to hear Royal Northern Sinfonia perform music by the composers of today in different spaces, and the opportunity to participate in a day of CoMA workshops at Sage Gateshead. Combined tickets available. Discounts for students and unemployed.

Chorus of RNS open the festival with a performance on the Concourse.

A change of scene for RNS musicians, with four concerts in one day at three different venues around the Ouseburn, before finishing at Sage Gateshead with a performance by RNS Moves.

An afternoon of vocal and instrumental workshops, led by James Weeks and Grace Rossiter. Culminates in a performance of Terry Riley’s Olson III, the sequel to his signature work In C, with vocalists and instrumentalists joining together to raise the roof at Sage Gateshead!

A chamber concert featuring music by six of the best and brightest contemporary composers. Music underpinned by the idea of listening afresh to the world around us, environments, places and sounds.

Our unique inclusive ensemble with a new programme including pieces from the CoMA Songbook.