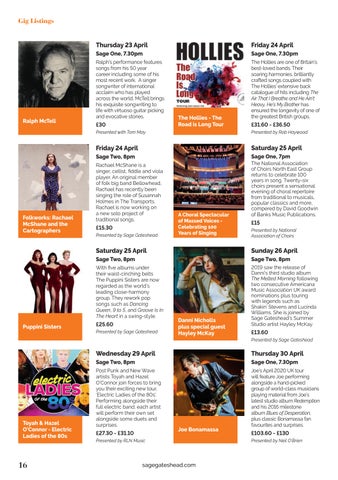 Folkworks: Rachael McShane and the Cartographers

Ralph’s performance features songs from his 50 year career including some of his most recent work. A singer songwriter of international acclaim who has played across the world, McTell brings his exquisite songwriting to life with virtuoso guitar picking and evocative stories.

The Hollies are one of Britain’s best-loved bands. Their soaring harmonies, brilliantly crafted songs coupled with The Hollies’ extensive back catalogue of hits including The Air That I Breathe and He Ain’t Heavy, He’s My Brother has ensured the longevity of one of the greatest British groups.

The Hollies - The Road is Long Tour

Presented with Tom May

Rachael McShane is a singer, cellist, fiddle and viola player. An original member of folk big band Bellowhead, Rachael has recently been singing the role of Susannah Holmes in The Transports. Rachael is now working on a new solo project of traditional songs.

A Choral Spectacular of Massed Voices Celebrating 100 Years of Singing

£15 Presented by National Association of Choirs

With five albums under their waist-cinching belts The Puppini Sisters are now regarded as the world’s leading close-harmony group. They rework pop songs such as Dancing Queen, 9 to 5, and Groove Is In The Heart in a swing-style.

Post Punk and New Wave artists Toyah and Hazel O’Connor join forces to bring you their exciting new tour, ‘Electric Ladies of the 80s’. Performing alongside their full electric band, each artist will perform their own set alongside some duets and surprises.