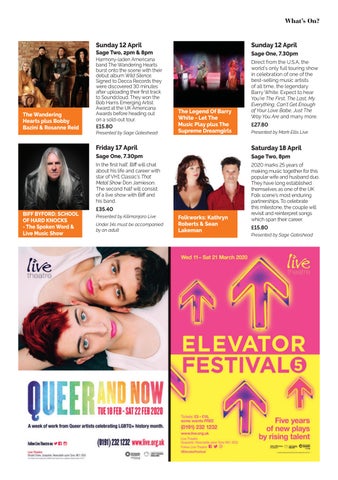 Harmony-laden Americana band The Wandering Hearts burst onto the scene with their debut album Wild Silence. Signed to Decca Records they were discovered 30 minutes after uploading their first track to Soundcloud. They won the Bob Harris Emerging Artist Award at the UK Americana Awards before heading out on a sold-out tour.

Direct from the U.S.A, the world’s only full touring show in celebration of one of the best-selling music artists of all time, the legendary Barry White. Expect to hear You’re The First, The Last, My Everything, Can’t Get Enough of Your Love Babe, Just The Way You Are and many more.

In the first half, Biff will chat about his life and career with star of VH1 Classic’s That Metal Show Don Jamieson. The second half will consist of a live show with Biff and his band.

2020 marks 25 years of making music together for this popular wife and husband duo. They have long established themselves as one of the UK Folk scene’s most enduring partnerships. To celebrate this milestone, the couple will revisit and reinterpret songs which span their career.

£35.40 Presented by Kilimanjaro Live Under 14s must be accompanied by an adult