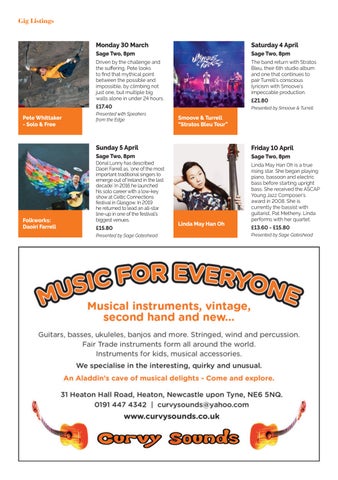 Driven by the challenge and the suffering, Pete looks to find that mythical point between the possible and impossible, by climbing not just one, but multiple big walls alone in under 24 hours.

The band return with Stratos Bleu, their 6th studio album and one that continues to pair Turrell’s conscious lyricism with Smoove’s impeccable production.

Presented with Speakers from the Edge

Dónal Lunny has described Daoirí Farrell as, ‘one of the most important traditional singers to emerge out of Ireland in the last decade.’ In 2016 he launched his solo career with a low-key show at Celtic Connections festival in Glasgow. In 2019 he returned to lead an all-star line-up in one of the festival’s biggest venues.

Linda May Han Oh is a true rising star. She began playing piano, bassoon and electric bass before starting upright bass. She received the ASCAP Young Jazz Composer’s award in 2008. She is currently the bassist with guitarist, Pat Metheny. Linda performs with her quartet.