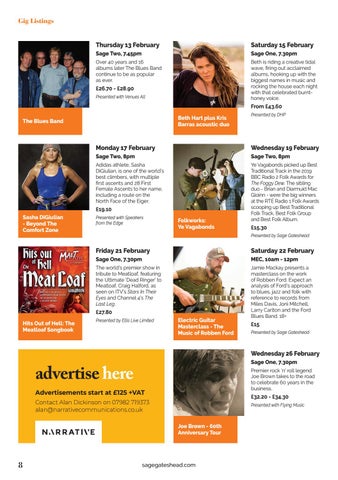 Over 40 years and 16 albums later The Blues Band continue to be as popular as ever.

Beth is riding a creative tidal wave, firing out acclaimed albums, hooking up with the biggest names in music and rocking the house each night with that celebrated burnthoney voice.

Adidas athlete, Sasha DiGiulian, is one of the world’s best climbers, with multiple first ascents and 28 First Female Ascents to her name, including a route on the North Face of the Eiger.

£19.10 Sasha DiGiulian - Beyond The Comfort Zone

Presented with Speakers from the Edge

The world’s premier show in tribute to Meatloaf, featuring the Ultimate ‘Dead Ringer’ to Meatloaf, Craig Halford, as seen on ITV’s Stars In Their Eyes and Channel 4’s The Last Leg.

Jamie Mackay presents a masterclass on the work of Robben Ford. Expect an analysis of Ford’s approach to blues, jazz and folk with reference to records from Miles Davis, Joni Mitchell, Larry Carlton and the Ford Blues Band. 18+