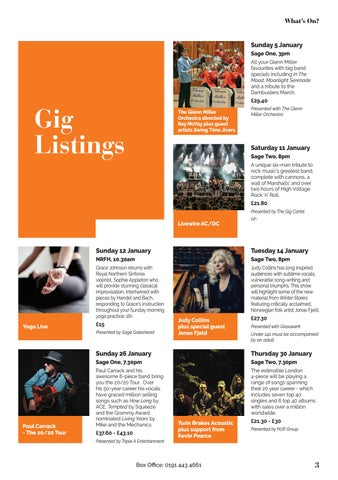 Sunday 5 January Sage One, 3pm All your Glenn Miller favourites with big band specials including In The Mood, Moonlight Serenade and a tribute to the Dambusters March.

Presented with The Glenn Miller Orchestra

Presented by The Gig Cartel 14+.

£27.30 Presented with Glasswerk Under 14s must be accompanied by an adult

Paul Carrack and his awesome 6-piece band bring you the 20/20 Tour. Over his 50-year career his vocals have graced million selling songs such as How Long by ACE, Tempted by Squeeze and the Grammy Award nominated Living Years by Mike and the Mechanics.

The estimable London 4-piece will be playing a range of songs spanning their 20 year career - which includes seven top 40 singles and 6 top 40 albums with sales over a million worldwide.