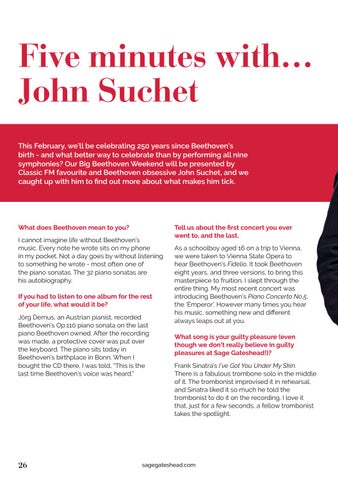 Five minutes with… John Suchet This February, we’ll be celebrating 250 years since Beethoven’s birth - and what better way to celebrate than by performing all nine symphonies? Our Big Beethoven Weekend will be presented by Classic FM favourite and Beethoven obsessive John Suchet, and we caught up with him to find out more about what makes him tick.

What does Beethoven mean to you? I cannot imagine life without Beethoven’s music. Every note he wrote sits on my phone in my pocket. Not a day goes by without listening to something he wrote - most often one of the piano sonatas. The 32 piano sonatas are his autobiography. If you had to listen to one album for the rest of your life, what would it be? Jörg Demus, an Austrian pianist, recorded Beethoven’s Op.110 piano sonata on the last piano Beethoven owned. After the recording was made, a protective cover was put over the keyboard. The piano sits today in Beethoven’s birthplace in Bonn. When I bought the CD there, I was told, “This is the last time Beethoven’s voice was heard.”

Tell us about the first concert you ever went to, and the last. As a schoolboy aged 16 on a trip to Vienna, we were taken to Vienna State Opera to hear Beethoven’s Fidelio. It took Beethoven eight years, and three versions, to bring this masterpiece to fruition. I slept through the entire thing. My most recent concert was introducing Beethoven’s Piano Concerto No.5, the ‘Emperor’. However many times you hear his music, something new and different always leaps out at you. What song is your guilty pleasure (even though we don’t really believe in guilty pleasures at Sage Gateshead!)? Frank Sinatra’s I’ve Got You Under My Skin. There is a fabulous trombone solo in the middle of it. The trombonist improvised it in rehearsal, and Sinatra liked it so much he told the trombonist to do it on the recording. I love it that, just for a few seconds, a fellow trombonist takes the spotlight.