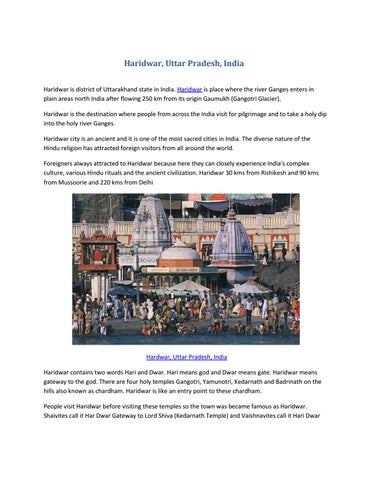 Haridwar, Uttar Pradesh, India Haridwar is district of Uttarakhand state in India. Haridwar is place where the river Ganges enters in plain areas north India after flowing 250 km from its origin Gaumukh (Gangotri Glacier). Haridwar is the destination where people from across the India visit for pilgrimage and to take a holy dip into the holy river Ganges. Haridwar city is an ancient and it is one of the most sacred cities in India. The diverse nature of the Hindu religion has attracted foreign visitors from all around the world. Foreigners always attracted to Haridwar because here they can closely experience India's complex culture, various Hindu rituals and the ancient civilization. Haridwar 30 kms from Rishikesh and 90 kms from Mussoorie and 220 kms from Delhi

Hardwar, Uttar Pradesh, India Haridwar contains two words Hari and Dwar. Hari means god and Dwar means gate. Haridwar means gateway to the god. There are four holy temples Gangotri, Yamunotri, Kedarnath and Badrinath on the hills also known as chardham. Haridwar is like an entry point to these chardham. People visit Haridwar before visiting these temples so the town was became famous as Haridwar. Shaivites call it Har Dwar Gateway to Lord Shiva (Kedarnath Temple) and Vaishnavites call it Hari Dwar

Gateway to Lord Vishnu (Badrinath Temple) it is also said that Haridwar is blessed by the presence of all three major Gods of Hindus namely Brahma, Vishnu and Maheshwar. Thus, with all these mythological links attached to its name, it's little wonder why Haridwar is often referred to as 'gateway to god'. Haridwar is an ancient pilgrimage site situated in the foothills of the shivalik range in Garhwal Himalayas. Haridwar is welcomes the river Ganga to the plain areas. Haridwar means gurgling of river Ganges, innumerable temples, groups of monks in saffron clothes, enchanting sounds of vedic hymns and the divine holiness.

Apart from religious importance Haridwar is also a centre for learning different arts and culture. Haridwar is well known as great source of Ayurvedic medicines and herbal remedies. Haridwar is now home to unique Indian tradition of teaching "Gurukula." Gurukula Kangri Vishwavidyalay is providing unique teaching in Gurukul system since 1902.

Haridwar is always place of interest for the researchers because it is one of the oldest living cities in India. Haridwar has numerous temples with interesting legacies. Maa Ganga after carrying the purity of heaven from the kamandal of Lord Brahma, washing the feet of Lord Vishnu and flowing through the sahastra of Lord Shiva came on this earth and made Haridwar as its divine flow area. From time immemorial, Maa Ganga has been doing the duty of absorbing the heat and negativities of this earth. Besides and, It is Gateway for the four dhams of Himalayas viz. Gangotri, Yamunotri, Kedarnath and Badrinath.

Haridwar is divided in several small areas such as Mayapur, Ranipur, Jwalapur, Har Ki Pauri, Motichur, Devpura, Bhupatwala, Haripur Kalan, Shivalik Nagar, and Brhampuri. Haridwar is also one of the four places where Kumbh Mela occurs after rotation of every twelve Years and Ardh Kumbh after every six years. It is said that drops of Amrit (Elixir) fell in to the Brahmakund of Har-Ki-Pauri, therefore considered that a dip in the Brahmakund Haridwar Legends: According to Kedarkhand (Chapter 111) in Skanda Purana, the ancient great King named as Shwet did long penance on the bank of river Ganges at Haridwar. The Brahma pleased with his devotion & blessed that the place will be special place with blessing from all gods and bathing here will be very fruitful to devotees. Raja Vikramaditya's brother Bhratuhari has also done penance here. In his memory, King Vikramaditya’s built a “Paudi (pawadi)”/ Steps here, which later became famous as Har Ki Paudi or Har-Ki-Pauri. Apart from this two Guru Datatrey also has spent great amount of time here in Meditation. Haridwar is mentioned in various ancient Indian scriptures (Purans, Upanishads and Mahabharata) as a Mayapur, Kapilsthan, Mokshdwar or Gangadwar. In Mahabharata great sage Dhaumya mentioned Haridwar (Gangadwar) as a major pilgrimage town to Yudhisthira. 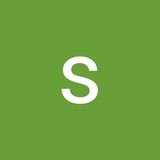 Haridwar is district of Uttarakhand state in India. Haridwar is place where the river Ganges enters in plain areas north India after flowing...

Haridwar is district of Uttarakhand state in India. Haridwar is place where the river Ganges enters in plain areas north India after flowing...