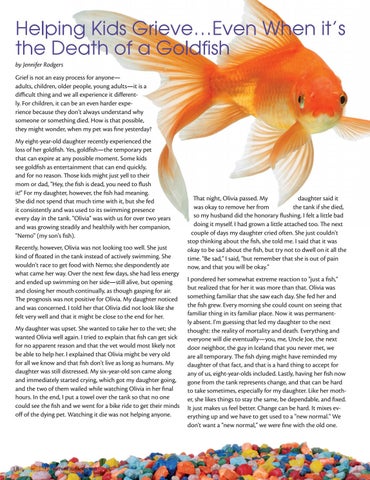 Helping Kids Grieve…Even When it’s the Death of a Goldfish by Jennifer Rodgers Grief is not an easy process for anyone— adults, children, older people, young adults—it is a difficult thing and we all experience it differently. For children, it can be an even harder experience because they don&#39;t always understand why someone or something died. How is that possible, they might wonder, when my pet was fine yesterday? My eight-year-old daughter recently experienced the loss of her goldfish. Yes, goldfish—the temporary pet that can expire at any possible moment. Some kids see goldfish as entertainment that can end quickly, and for no reason. Those kids might just yell to their mom or dad, &quot;Hey, the fish is dead, you need to flush it!&quot; For my daughter, however, the fish had meaning. She did not spend that much time with it, but she fed it consistently and was used to its swimming presence every day in the tank. &quot;Olivia&quot; was with us for over two years and was growing steadily and healthily with her companion, &quot;Nemo&quot; (my son&#39;s fish). Recently, however, Olivia was not looking too well. She just kind of floated in the tank instead of actively swimming. She wouldn&#39;t race to get food with Nemo; she despondently ate what came her way. Over the next few days, she had less energy and ended up swimming on her side—still alive, but opening and closing her mouth continually, as though gasping for air. The prognosis was not positive for Olivia. My daughter noticed and was concerned. I told her that Olivia did not look like she felt very well and that it might be close to the end for her. My daughter was upset. She wanted to take her to the vet; she wanted Olivia well again. I tried to explain that fish can get sick for no apparent reason and that the vet would most likely not be able to help her. I explained that Olivia might be very old for all we know and that fish don&#39;t live as long as humans. My daughter was still distressed. My six-year-old son came along and immediately started crying, which got my daughter going, and the two of them wailed while watching Olivia in her final hours. In the end, I put a towel over the tank so that no one could see the fish and we went for a bike ride to get their minds off of the dying pet. Watching it die was not helping anyone.

That night, Olivia passed. My daughter said it was okay to remove her from the tank if she died, so my husband did the honorary flushing. I felt a little bad doing it myself. I had grown a little attached too. The next couple of days my daughter cried often. She just couldn&#39;t stop thinking about the fish, she told me. I said that it was okay to be sad about the fish, but try not to dwell on it all the time. &quot;Be sad,&quot; I said, &quot;but remember that she is out of pain now, and that you will be okay.&quot; I pondered her somewhat extreme reaction to &quot;just a fish,&quot; but realized that for her it was more than that. Olivia was something familiar that she saw each day. She fed her and the fish grew. Every morning she could count on seeing that familiar thing in its familiar place. Now it was permanently absent. I&#39;m guessing that led my daughter to the next thought: the reality of mortality and death. Everything and everyone will die eventually—you, me, Uncle Joe, the next door neighbor, the guy in Iceland that you never met, we are all temporary. The fish dying might have reminded my daughter of that fact, and that is a hard thing to accept for any of us, eight-year-olds included. Lastly, having her fish now gone from the tank represents change, and that can be hard to take sometimes, especially for my daughter. Like her mother, she likes things to stay the same, be dependable, and fixed. It just makes us feel better. Change can be hard. It mixes everything up and we have to get used to a &quot;new normal.&quot; We don&#39;t want a &quot;new normal,&quot; we were fine with the old one.

Are you ready for the back to school rush? We've got the perfect giveaways to help you prepare for the school year + check out a few tasty, kid-approved recipes. As always, we've got a round-up of family events in an around Sacramento + so much more! 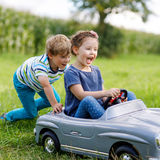