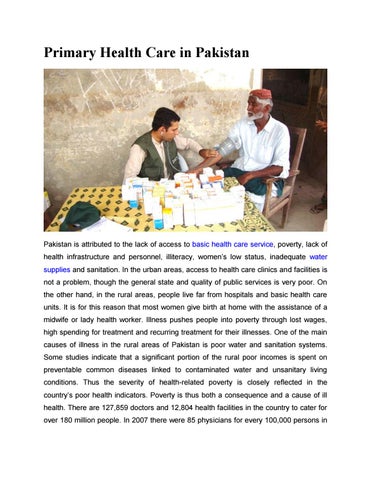 Pakistan is attributed to the lack of access to basic health care service, poverty, lack of health infrastructure and personnel, illiteracy, womenâ&#x20AC;&#x2122;s low status, inadequate water supplies and sanitation. In the urban areas, access to health care clinics and facilities is not a problem, though the general state and quality of public services is very poor. On the other hand, in the rural areas, people live far from hospitals and basic health care units. It is for this reason that most women give birth at home with the assistance of a midwife or lady health worker. Illness pushes people into poverty through lost wages, high spending for treatment and recurring treatment for their illnesses. One of the main causes of illness in the rural areas of Pakistan is poor water and sanitation systems. Some studies indicate that a significant portion of the rural poor incomes is spent on preventable common diseases linked to contaminated water and unsanitary living conditions. Thus the severity of health-related poverty is closely reflected in the countryâ&#x20AC;&#x2122;s poor health indicators. Poverty is thus both a consequence and a cause of ill health. There are 127,859 doctors and 12,804 health facilities in the country to cater for over 180 million people. In 2007 there were 85 physicians for every 100,000 persons in

Pakistan, or in other words, one doctor for 1,225 people. There are only over 62,000 nurses all over Pakistan who are supplemented with a strong force of 96,000 Lady Health Workers (primary health care providers). There were 13,937 health institutions in the country including 945 hospitals (with a total of 103,285 hospital beds), 4,755 dispensaries, 5,349 Basic Health Units (mostly in rural areas), 903 Mother and Child Care Centers, 562 rural health centers and 290 TB centers. Pakistanâ&#x20AC;&#x2122;s total health expenditures amounted to 3.9 percent of gross domestic product (GDP) in 2005, and per capita health expenditures were $49. The government provided 24.4 percent of total health expenditures, with the remainder being entirely private, out-of-pocket expenses. Millennium Development Goals are eight international development goals that all 192 United Nations member states and at least 23 international organizations have agreed to achieve by the year 2015. They include reducing extreme poverty, reducing child mortality rates, fighting disease epidemics such as AIDS, and developing a global partnership for development. Our real NGO,s are also focusing on some of the infectious diseases like malaria, tuberculosis, HIV/ AIDS, dengue fever, maternal and child health. Dengue fever is a viral disease associated with urban environments. It is also known as Break Bone fever. The presence of fever, rash, and headache (and other pains) is particularly characteristic of dengue. Malaria is a problem faced by the lower class and some of the upper class people in Pakistan. The unsanitary conditions and stagnant water bodies in the rural areas and city slums provide excellent breeding grounds for mosquitoes. The symptoms of malaria vary from person to person. The characteristic symptom of malaria is fever accompanied by flu like illness, muscle ache, headaches and chills. Diarrhea, nausea, vomiting and cough are also observed in some cases. Motherâ&#x20AC;&#x2122;s health in Pakistan remains neglected due to a multiplicity of factorsâ&#x20AC;&#x201D;social, economic, and political. Many women lose their lives in the process of giving births to their children and this means that, in Pakistan, pregnancy is not safe in its effects on the mother, newborn and household. The overall development process also ignores of what is needed to improve the welfare of the vulnerable group such as the expecting mothers. Pakistan, therefore, represents an unacceptably high maternal mortality setting and needs an immediate attention for substantial and sustained reduction in the risk of dying during pregnancy.

In Pakistan the health sector has been badly neglected and the policy makers have shown a callous lack of concern for educating the people and providing them with health care. No wonder, the quality of life of the people has remained low and the nation has

not been able to achieve higher levels of economic progress due to underdeveloped human resources. The under-development of the health sector is manifested in Pakistanâ&#x20AC;&#x2122;s poor health-related key indicators. Life expectancy at birth is 59 years while the average for other comparable countries is 61 years. The infant mortality rate is 95 per thousand as compared to 60 in other countries. Expenditure on health as a percentage of GNP also remains low. The operational strategy should be to encourage greater involvement of the private sector. Though the current government is trying to improve the health and nutrition status of the country through promotional, preventive and rural services. Extended programmes of immunization, nutritional and child survival, accelerated health, matching grants for health projects and greater role for the private sector are some of the areas witnessing progress during the year. A new cadre of community health workers needs to be created to act as a bridge between the community and health units through the Social Action Programmed. In rural health the emphasis will be on the up gradation of Basic Health Units and Rural Health Centers. Adequate food availability, water supply and sanitation will also be included in this programme. Health facilities in Pakistan are inadequate, mainly due to a lack of resources and a high population growth rate. The country needs food, a proper water supply, and adequate sanitation. However, Pakistan is the first country to nearly completely eradicate disease, having reported fewer than 100 cases in 1995. Pakistan is also working toward universal immunization, disease prevention, health promotion, and curative and rehabilitative services. Several programmes are underway to improve health care coverage and control tuberculosis, leprosy (disease), and cancer. One such programme was a Child Survival/ Primary Health Care programme to reduce mortality, malnutrition, and deaths due to diarrheal diseases. As of 1999, 36pc of children under five years old were considered malnourished. The goiter rate was high in 1996; 40 of every 100 school children were affected by goiter (disease). In 1997, 90pc of children up to one year of age were immunized against tuberculosis; 74pc against diphtheria, pertussis, and tetanus; 74pc against polio; and 74pc against measles. There were an estimated 0.6 physicians and 0.7 hospital beds per 1,000 people. In 1993, there were 302 health centers with 2,462 beds serving the rural population. In 1991, centers for the disabled included 11 physical therapy centers, 12 mental retardation centers, 11 centers for the visually impaired,

and 12 centers for the hearing impaired. In the Punjab health budget at least 2700 million do not have the exact performance of the above department regarding provide measles free Punjab at province level rural health programme not performing their duties well. The lower staff of towns is used to work with carelessness and monitoring teams are not monitoring accordingly and district co-coordinating officer are not giving their exact report to the Chief Minister. Regarding the health of nation, Safdar Ali Malik (Radiologist) trying his best to procure the health of nation by health concern modern technology. But thickly populated Pakistan needed lot of Safdar Malik in the shape of young doctors to serve in rural areas to safe the lives of future generations. The health ministry should announce very charming packages for the doctors and medical staff who shall perform their duties in rural areas for better safety. In 2000, the infant mortality rate was 83 per 1,000 live births. Major causes of infant mortality are immunization diseases, diarrhea, malnutrition, and poor environmental sanitation. In 2000, 88pc of the population had access to safe drinking water and 61pc adequate sanitation. The estimated overall mortality rate was 9 per 1,000 people in 2002. The leading causes of death were diarrhea, pneumonia, tuberculosis, cardiovascular diseases, and cancer. Average life expectancy in 2000 was estimated at 63 years. Condition of rural areas is still grave as doctors prefer to work in urban areas with more salaries and comfortable lifestyle. There is no opposing the fact that the prosperity and development of a state mainly depend upon the health of its citizens. If the citizens are physically powerful and well built, then the state can go ahead in all fields of life. In this way the children having sound health and active bodies lay the foundations of the edifice of a strong state (nation). The sound health and body of the children also depend upon the good health and sound body of their mothers. If a mother is good, energetic and healthy, at last her offspring will also be healthy. The first five years of the child after the birth are very important for his/her life to come. A weak and ill mother will not only affect negatively the health of her children but also become a trouble on the whole members of her family. Especially the time period between pregnancy and delivery is very important for both the mother and the child. Without proper precautionary measures and viable medical treatment, there poses a constant threat to the life and existence of the both. Experts say that at the time of delivery, precautionary measures must be taken to spoil the possibilities of any bad results. It is also pertinent to note here that the high ratio of death and deceases among the children and women during the time of pregnancy and delivery is one of the major health problems in Pakistan. According to a reliable estimate about 13 000 mothers annually die during the time of delivery. Most of them belong to rural and backward areas, where there is no transaction and

provisions of health facilities to the poor and down trodden segments of these areas. It is also known that the mortality ratio in rural areas is twofold as compared to the urban areas. Need of the hour a full pledged drive and a campaign should be launched to create awareness among the mothers regarding the hardship and impediments coming in their way. The health department shall focus more on the issue to yield maximum positive result in order to save the future of millions of women and children of the rural region. I would suggest to the public representatives, community leaders, religious scholars, government officials and the teachers community to play their vital role to spread this noble message to each and every member of society. Only in this way we can protect and preserve the future generation of our country. 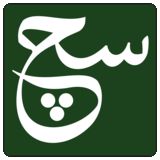